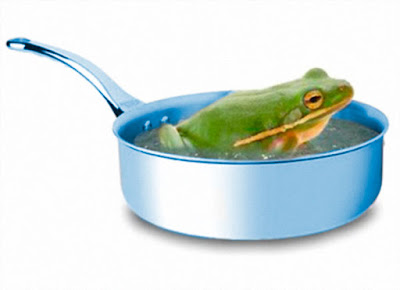 The boiling frog is a parable describing a frog being slowly boiled alive.

The premise is that if a frog is put suddenly into boiling water, it will jump out.

But if the frog is put in tepid water which is then brought to a boil slowly, it will not perceive the danger and will be cooked to death.

Yet what if we reverse this parable to speak of peace and prosperity.

And that if said frog were to be brought to a cooling point of unprecedented mercy from a boiling beginning, would not the shock of serenity be equally surprising?

I propose that is what is happening now in our world.

That peace is quietly and slowly cooling the hatred and violence behind the scenes-- worldwide. So much so, few of us long boiling frogs even noticed the unified coordination.

Look at the Middle East as an example, ISIS has been systematically eliminated by a new coalition of benevolent forces in less that two years.

Did you know Russia's military operations began September 30, 2015... interesting that this date is also exactly two years before the US Congress must pass a national budget for the 2018 fiscal year--October 1, 2017.

Interesting timing to say the least.

Israel was reduced to regional state actor as a result, forced into peace by the Chinese, Russians and Iranians in Syria. Even the UN Security Council voted 14-0 (USA abstained which equates to an affirmative vote) in favor of a two state solution with Palestine for the first time in its history.

Bloody militants gang and third party terrorist group wars in Africa, South and Latin Americas have all been toned down to bit erratic tantrums of isolated violence.

The Yemen war with Saudi Arabia has been reduced to a dull lions roar.

Long standing US wars since 9/11 in both Afghanistan and Iraq have been minimized to complete military removal consideration.

Illegal Mexican and Canadian boarders to to America have nearly completely shut down for all drug traffickers.

Decades worth of North Korean nuclear threat rhetoric proved to be just that... empty words by two radical dictators.

On going violence on the Ukrainian boarder with Russia has been simmered.

Venezuela completed a national election without a disruptive coups d'tat.

Where is there war between nation states anywhere in the world? I defy you to find one little cooking frogs?

Is all this just random coincidence? Oh hells no!

It's called GESARA and such peace on earth also includes global financial reforms that sweep the species into an unprecedented period of infinite wealth and prosperity.

It's all connected to a 26,000 year, 13 millennia era transition from dark malevolent control over the earth's sacred resources (including humanity itself) to a light benevolent force reasserting its Heavenly authority in our lifetimes.

Believe, don't believe... there is but one truth little frogs. And my frog feet are feeling the frying pan called life at a peaceful room temperature versus chaotic boiling hot. Sobeit.