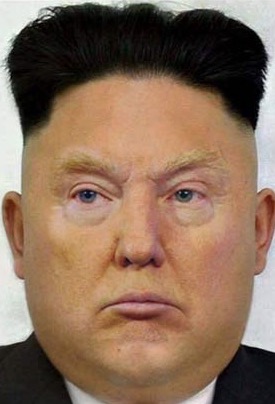 I don't hate Trump's politics. In fact, I could careless about his politics until he's out of office so we can RV.

I do loathe being lied to. And Trump is a walking, talking and tweeting lie for the Dark Nobility Families in Eastern Europe.

Know that North Korea is a Rothschild created nation state meant to test national MK Ultra mind control programming to use on the entire world by the same Dark Nobility Families of Eastern Europe, of which the Rothschild's are one of thirteen.

The Rothschild's also financed the nation state of Israel based on diplomatic war reparations for the holocaust caused by the German Nazi movement during WW2.

Ironically, Nazi is actually short for Ashkenazi, which is one of three genetic tribes of Israel all with Jewish religious origins, but actually from the Khzarian Empire which was located primarily in the nation state known today as the Ukraine.

Confused yet? I know. But stay with me fundamental Christians and upset true Hebrews. I'm not talking about religion here, but about deception using religion as cover.

Therefore, the current North Korean nuclear escalation is actually a Dark Nobility threat against China and Russia, not the USA; simply due to the geographic realities of traveling a slow moving ballistic missile over 5,500 miles to the American western coastline.

A much more realistic threat is said ballistic middles reaching Beijing and Moscow.

Know also that all North Korean government decisions are being controlled by Mossad generals from Israel (who also control ISIS) in an attempt to threaten the Chinese Elders into not releasing the RV as they did back on 9/11/01.

Militarily, this sudden out-of-nowhere threat has absolutely nothing to do with the United States per se; in fact, using American military bases from both South Korea and Japan, the North Korean army could be militarily defeated in less than a week IAM told.

Quite an effective distraction away from Trump's impending impeachment process going forward, huh? Might even buy the bad guys some extra time, right?

Netanyahu like Trump, like Proshenko and the new Prince in the House of Saud, all are scrambling for oxygen in same end game with their respective regimes as the cabal zombie apocalypse finally sets in.

Collectively, they are praying their Dark Sun God on Saturnalia will emerge victorious from a North Korean nuclear attack--and jumpstart WW3--this might stop the RV against the GESARA Treaty of nations which is unified across the rest of the world.

They just don't know how to quit unless they are killed. Sobeit.

This last ditch plan of "random chaos" is their true Hail Mary pass that is already up in the air, threatening to land, warhead nose first, into an end zone full of ready, trained and professional defenders.

Reversal of fortune is just not gonna happen. And death of their grand Zionist agenda will be publicly pronounced dead shortly. And all those millennia of planning are rendered irrelevant and vanish energetically.

Interestingly, the NPTB have the situation so well under control that they are allowing the North Korean threat to appear as real, even hyping the bogus storyline within the USA, as to scare Donna's hard core political base about Kim Jong-Trump's nuclear tendencies when dealing with US weapons of mass destruction missile codes.

Which she does not have btw... and never did. Because Trump is a fake President and has been from day one of her bogus administration.

After screwing up yet another international situation, it might be a lot easier for Trump's 24% white, uneducated, gun carrying and racist voting block to accept Donna's Presidency ending and letting go of the rage that a sudden impeachment may unintentionally cause if and when announced.

Meanwhile, Speaker Paul Ryan never insults Trump because he wants and needs the 24% rural anglo base in the upcoming 2020 Presidential election.

Mike Pence is not running for President folks, that's not to say he won't be a temporary President between Trump and Ryan... but he's so far right of right, Pence is simply unelectable in a national election.

Forgive my persistence on this matter.

Just please be open to the concept of Trump's upcoming resignation and keep your eye on all political events as they relate to the release trigger mechanism of the RV .... that's all I ask.

You, Youssef are an asshole! :yes:

1. Yosef said NPTB have neutralized the evil cabal, not even paying any attention.  He does a 180 in this post because his initial, 'intel' has been exposed as fraudulent.
2. Nazi is an abbreviation of German pronunciation of Nationalsozialist (based on earlier German sozi, popular abbreviation of "socialist"), from Nationalsozialistische Deutsche Arbeiterpartei "National Socialist German Workers' Party," led by Hitler from 1920.  Has exactly zero reference to Ashkenazi Jews.
3. Paul Ryan will be replaced by Trey Gowdy, as his leadership in Congress has been proven ineffective.  He has no standing, and there is no NESARA in place where he was given any authority beyond a Congressional seat.  If he was appointed NESARA leader, why does he need to worry about a 2020 presidential election?
4. Yosef uses an op-ed piece from The Hill to support his political claims.  LOL.  Like I've said 50 times, Yosef is a tool and mouthpiece of the cabal, parroting lies and deception.
5. Yosef continues to label millions of Trump voters as white, uneducated and racist.
6. Mueller will be removed, or will resign, from special prosecution role.  There will be no impeachment or resignation.

I cannot stand Trump.  In fact, I cannot stand politicians, because they are liars who wield excessive power over our lives.  Government via consent of the governed has all but disappeared.

Yosef is a liar and a fraud, a mouthpiece for evil.  He is a deep state operative, a puppet on a string.  Like so many, 'intel providers' before him, he is in cahoots with individuals who capture emails and personal info for purposes other than supplying precious (and 100% fake) Tetelestai phone numbers.  Whether it's Chronicles or Clarion Call, he is a slimy POS bastard who is paid to lie.  He already has a lengthy case file, and his days of lying for profit are numbered, 100% fact.

@Sam I Am wrote:I could careless?  "Careless" is an adjective, Yosef.  Like "stupid", "dishonest", and "unscrupulous".  I think you mean "care less".  Maybe if you cared more about the truth you wouldn't be so careless.

Loony tunes!!!This guy is an idiot. No wander he's been kick out of almost all the chat rooms.....What a delusional moron.

I could be incorrect but wasn't mboswell recently defending one of the scumbag scammers? If my assumption is spot on has he seen the light? Lol!