Obama holdovers, no doubt. He still has people in the U.S. government working to continue his policies of destroying America.
President Trump: purge, baby, purge.

By Keith Griffith For Dailymail.com, 22 July 2017:
A top US general has blamed leaks to the New York Times for giving ISIS leader Abu Bakr al-Baghdadi the ability to evade American forces seeking to kill him.


General Tony Thomas, who leads Special Operations Command, said Friday at the Aspen Security Forum in Colorado that his teams were ‘particularly close’ to al-Baghdadi after a 2015 raid, Fox News reported.


That operation, a Delta Force commando raid in eastern Syria, killed ISIS oil minister Abu Sayyaf and captured his wife, yielding a trove of information about the terror group’s operations and logistics.


‘That was a very good lead. Unfortunately, it was leaked in a prominent national newspaper about a week later and that lead went dead,’ said Thomas, in an apparent reference to a New York Times report about the raid from June 2015.

General Tony Thomas, who leads Special Operations Command, blamed this 2015 report in the New York Times for tipping off al-Baghdadi to the insights gained from a Delta Force raid

The ruins of the Grand al-Nuri Mosque in Mosul, where al-Baghdadi declared his caliphate, are seen earlier this week. A US general is blaming leaks for allowing the ISIS leader to escape
That report read in part: ‘New insights yielded by the seized trove — four to seven terabytes of data, according to one official — include how the organization’s shadowy leader, Abu Bakr al-Baghdadi, operates and tries to avoid being tracked by coalition forces.’ 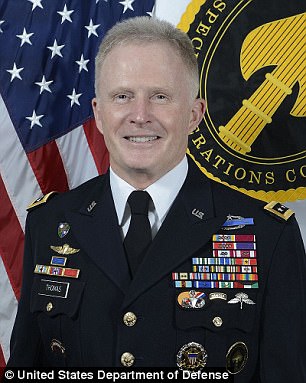 General Tony Thomas leads the US Special Operations Command
The New York Times report even detailed knowledge gained about al-Baghdadi’s security precautions for meeting and communicating with his lieutenants, including the use of wives to pass messages.

‘The challenge we have [is] in terms of where and how our tactics and procedures are discussed openly,’ Thomas said.

‘There’s a great need to inform the American public about what we’re up to. There’s also great need to recognize things that will absolutely undercut our ability to do our job,’ he continued.

President Donald Trump seized on the remarks early Saturday morning, tweeting: ‘The Failing New York Times foiled U.S. attempt to kill the single most wanted terrorist,Al-Baghdadi.Their sick agenda over National Security’.
The New York Times did not immediately respond to a request for comment from DailyMail.com.

Thomas offered a ‘conservative’ estimate that US forces and allies had killed 60,000 to 70,000 ISIS fanatics, saying of al-Bagdadi that ‘everyone who worked for him initially is dead or gone’.


‘I think Baghdadi is alive, I think he’s alive and I’ll believe otherwise when we know we’ve killed him,’ Mattis told Pentagon reporters on Friday.


‘We are going after him, but we assume he is alive.’


Asked whether al-Baghdadi still plays a command role in ISIS, Mattis mused: ‘To define that role, is it operational? Is it strategic? Is it propaganda? Is it spiritual? Is it physical? I can’t define it, but until I see his body, I’m going to assume he is alive.’
There have been persistent rumors that Baghdadi has died in recent months.


The Britain-based Syrian Observatory for Human Rights, a longtime conflict monitor, last week said it had heard from senior IS leaders in Syria’s Deir Ezzor province that Baghdadi was dead.

Page 1 of 1
Permissions in this forum:
You cannot reply to topics in this forum
Who is online?
In total there are 113 users online :: 1 Registered, 0 Hidden and 112 Guests :: 2 Bots