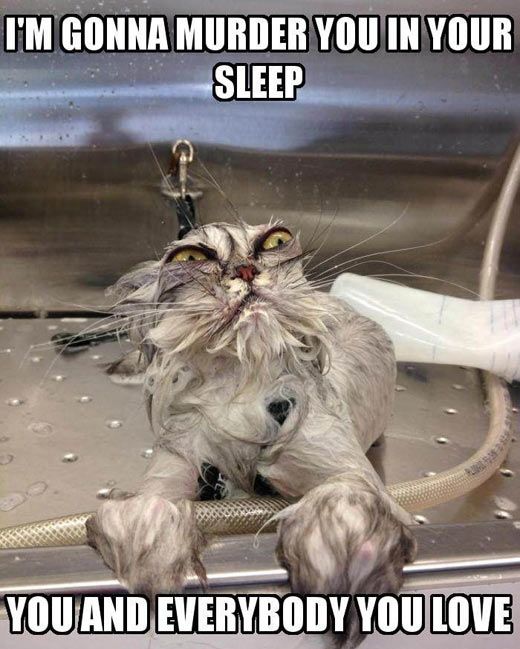 
Well my friends, things are really getting fun now.   Frankly "things" have been in the works for a while, but I only got "Official Authorization" to drop the hammer today.  So I posted this post to "out" the Cabal who are secretly controlling Patrick's Intel Dinar Chronicles.

I have gotten reports from former Cabal agents that there are as many as 15 Cabal operatives that are assigned to infiltrate Patrick's site.  My first step was to call out Patrick for not posting one of my posts, as if it was really Patrick's fault, which it was not.  Anyway here was that Original Post:


By the way, no worries about Enerchi posting his thoughts on it, I said he could.  It was no biggie to me.  Anyway, supposedly Patrick responded with this post:


I then got FULL AUTHORIZATION for "Operation Exposure" (A sting) in which I would write a post telling Patrick and other site operators that there email accounts were hacked and to change their email pass words.  This was designed to cause the Stupid Cabal Operators to make a move that would expose themselves..... and we were not disappointed.  Those stupid fools had a knee jerk reaction and put out a post on IDC that was so flawed, that it is obvious to anyone reading the post, that it was NOT Patrick's words.  Here is the Cabal Operator's Pathetic response:


Bear in mind that this was not the original Post.  They have already made changes to it, and I expect them to make even more once they read this post.  The first glaring mistake is that the poster, who was supposed to be Patrick, said they had over 25 years IT experience, which is longer than Patrick has been alive.  GOOD ONE, you stupid idiots!  Of course we did a screen capture of the original post because we knew they would make changes as soon as they realized what they had done, and they did.  However, here is the original "Version:" (This has all been documented by the good guys as well) 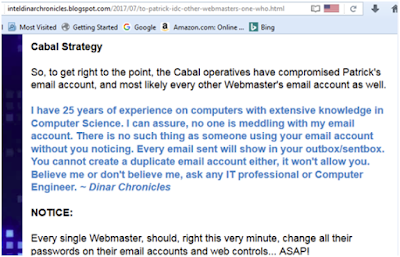 There is NO WAY Patrick would have said he had 25 years experience, when he has not even been alive that long.  They have now changed it to 15 years.  But here (Above) is the evidence for you all to see.


Frankly there are so many other things like the tabs that are open on the computer images they used, and my emails they posted and the "ATTACK" wording that is NOT how Patrick thinks, or writes.  Remember I was telling him to change his pass words, and that is good advice, even if you are not infested by Cabal scum.   Patrick would have thanked me, not demanded I prove the emails I sent him.  That is clearly Cabal and they have tipped their hand.  Grandfather laughed and said "Check Mate!"   My friends, one day we are going to tell stories about how we tricked the Stupid Cabal Fools again and again.   I guess it is all that inbreeding that causes severe stupidity.


By the way, that part about "Sent" emails not being able to be deleted, has got to be the work of a moron (Lots of inbreeding).  Do yourself a favor and go to your email sent file and see if you can delete a sent email.... How easy was that?  What moron who has 25 years in IT would say that you cannot delete an email from a sent file?  Oh, by the way, why don't you check with the Democratic Convention people and tell them that email accounts cannot be hacked.  Yes, I got a good laugh out of that one as well.


Anyway, I got emails from some of my friends who also have contacts, and were able to recognize this cabal post for what it was.  Here is Daughter of Terra's comments on the matter:


From: Daughter Of Terra


Recently, there was a post by Richard McKim Jr. that was imported over to IDC. At which time, the proposed site master felt compelled to comment on it.


With those comments came a graphic of Richard's emails he sent privately to the site owner. Without Richards consent. It was not for posting.


In regard to the graphics attached you can see not one but two different graphics, screenshots of computer screens. Please note that these computers have different backgrounds. Also note that the title of a post is also labeled in the word document on the task bar. Which happens to be the exact title of a post that was written by a poster. Also on IDC TODAY.


This post was created by a supposed Nicole Frolick. Nice.


Nicole Frolick is the caller who called in to the RTC. 410 caller who bashes One Who Knows and who has done so before with Fisher. Make no mistake. She has also infiltrated the site with several cohorts such as One who Teaches, Sugarbear, and many others. And people are none the wiser.... Until now...


Just from common sense. Who changes their desktop background in the middle of getting an email. Clearly this is from two different computers.


This is according to Patrick allegedly, but initially it was 25 years. How do you forget how long you've been alive? (Please see this attachment for ORIGINAL VERSION) 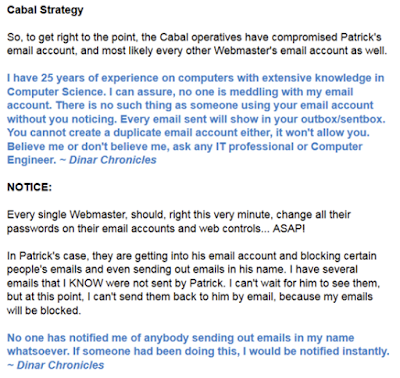 It has been changed and Now It Reads:

I have 15 years of experience on computers with extensive knowledge in Computer Science. I can assure, no one is meddling with my email account. There is no such thing as someone using your email account without you noticing. Every email sent will show in your outbox/sentbox. You cannot create a duplicate email account either, it won't allow you. Believe me or don't believe me, ask any IT professional or Computer Engineer. ~ Dinar Chronicles


You have to admit. This does not pass the smell test. This dog don't hunt. Something is going on here and it has to be called out.


I got another email from Nau D. who also noticed the Cabal aspects of this post and had a few comments as well.


I'd like to add on to this with something I've noticed about this fraud of a post:


"...no one is meddling with my email account. There is no such thing as someone using your email account without you noticing. "


Considering that the mainstream media is all over the email scandal with Donald Trump Jr. and the Russians, that's a very ill-timed statement to make.


2) Speaking of that statement...it's wrong.


Any hacker worth his salt can remote access a computer, install a trojan, or a program that monitor keystrokes, and log email passwords, among other more important stuff...
And unless Patrick is awake at all times, and constantly watching his email...


The bottom line is that the Stupid Cabal are self-destructing so badly right now that it is almost comical.  They are so easy to bait and they respond so quickly and foolishly, it makes this whole take down fun.  At the higher levels, they are already known, and it is almost like a cat toying with a mouse.  They can't stop anything, they can't do anything, and they are impotent.  Soon they will all be picked up and dealt with.  They will have an extended stay at "Camp FEMA" where they will spend their remaining days thinking about what they have done.


I want to make a special shout out to our Hero Enerchi of Ascension With Earth who was not corrupted and has provided a safe place for me to post in these remaining days.  This is a place where the truth can be spoken and the Cabal can be outed for all to see.


What will happen with Patrick and IDC?  Who knows, the game is still afoot.  This post is to let my Family and Friends in on the fun and the "Game Play."  Don't worry, I expect to see a lot more stupid Cabal moves that will give us some entertainment in these remaining days before we ride off into the sunset and they get put away like the mangy rats they are.  All is well and getting even better and more fun every day.  Stay tuned, the big show is about to happen!


P.S. I am going to out some more Cabal Operatives on the Willie Truth Call on Wednesday Night.  Be sure to be on the call or catch the replay.