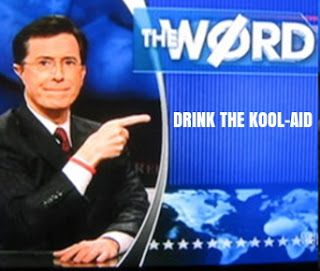 And that brings us to tonight's word: DRINK THE KOOL-AID

Drink the Kool Aid has a negative connotation doesn't it? How many times have we heard that here? How could such a tasty, yet nutritionally void, empty caloric childhood experience become such a gloomy term? If you accuse someone of drinking the Kool-Aid, you might as well accuse them of being crazy as a loon in a tin foil hat. Or of being in a cult. Same goes for society's eyes. Anyone here get accused of being in a currency cult? Have your beliefs on society changed to lead others to such a conclusion? Do your relatives notice you've been acting strangely? Are you refusing to go to church and telling loved ones that Christmas is a celebration of Jesus's death and not his birth? Are you talking to plants? Are you saying "Where's my free energy everytime you pay your electric bill?"? Are you continuing to smoke because the healing ships are on the way? Are you telling friends that "they" are among us? And space ships the size of cities are just going to appear someday overhead and to stay calm when they do? "Why can't we see them now?" They're cloaked, DUH. So being implicated of wearing tin foil hats and drinking the Kool-Aid kinda go hand in hand dont they? I mean what's the comeback? Nuh-uh. They kinda got us.

I guess the origin of the saying was a very dark note in our history, so it's understandable if the mind defaults to a negative. Jonestown (no boom). But could there have been a cabal psyop behind it? Could they have put a spin on it to benefit their agenda? Could the lesson be to never step out of line of their imposed way of life? Only eat our chicken wings. Only drink our Bud Light. Only eat in our franchise restaurants. Only pray in our churches. Only bow to our Gods. Only fly our friendly skies. Only use our petro dollar? Only buy our Michael Jordan endorsed tennis shoes. Only gamble in our casinos. Only take our oxycodone. Our Vicodin. Only smoke our marijuana. Only work in our factories. Only vote for our candidates. Only fight in our wars. And that anyone who doesn't follow this cabal agenda gets labeled a cultist. An anarchist. But then again, anarchy is a pysop too. Aye Dios mio. 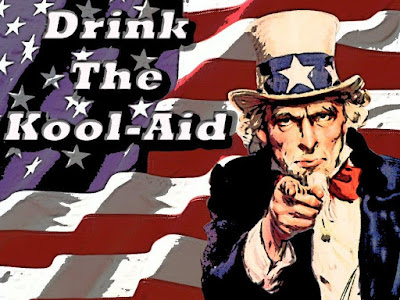 Now that many of our cabal friends have been shown the door, I'm glad to say we seem to be left with the true Kool-Aid lovers. The Kool-Aid afficionados. Thankfully we've got the best exterminator OWK in dinarland. The Great Ratsby Exterminators. Rat's All Folk. The Vermin Surgeon. Mice Knowing You. Murder She Roach. The Pest Of Times And The Worst Of Times. Mouse Arrest. Fugget A Bat It. What can I say? It's a booming business.

But it kinda got me thinking. How many other sites are still infested? Has to be at least one in every house. How many have we gone through? And that brings us to part one in a one part series: (cause no need to take it further) cabal plants, where are they now? Tonight, ubiety. The fighting ubiety!!! Or should I say the fighting "you were, ubiety"? Patrick, you mind if we get that in bold for old times sake? For the good times? Is that gonna come out the budget? I know, I know, this is a budget operation. For me.

I believe due to the sheer heartburn you caused in Patty's pub, you deserve a eulogy. As a plant, I'll be the first to admit you did your job well. You kept us squabbling like turkeys on the farm and our blood boiling thru the roof. Or maybe just mine. Were you in the pocket of big pharma, high blood pressure division? Is an atta boy in order? But I will say your entire time here was not all malevolent. In a painful yet frustrating way, you pushed many of us to find our path. We were forced to pick a side. Whats that song?... "When you go, all I know is you're my favorite mistake"? And in some weird way you gave birth to many a light worker here, maybe even to Heisenberg. Sounds kind of gross when I say that out loud (sounded better in my head). So... Mr. ubiety, to the slickest, slyest, foxiest cabal plant that ever had me fooled, (I just thought you were a pompous dickhead. Counselor for 35 years? That one didn't sit right) I will pour one out for my homie.

That being said, I'm glad to see you go. The Rolaids were eating into my Guinness budget. So I'm just going to sit back tonight and watch Elaine boogie on your grave. Calling all Lightworkers (sorry uncle Frank, couldn't help myself), lets dance.

But I ramble.....where was I?.....ah yes...Kool-Aid..... Ahem......Imagine all of us in dinarland went to an arcade. Just one big tin foil hat birthday party at Putt Putt or Dave & Buster's. A Kool-Aid arcade (great band name). And it was free game day. So if you're like me, and you are, we spent all day hitting every damn game in that arcade. Even if we didn't like it we hit it. Exhausting but we did it. We hit all the BGG calls. We hit Stryker. We hit Exogen. We caught Blondie on wnsom. We caught Mr. billionaire so freakin bad. We hit skee-ball. We hit the basketball toss and Pac-Man. As they say in baseball, we touched them all. So what does everyone do after such a thing? They go back to the one game they like, the one that resonates with them. The vibration that matches their frequency. Or, similarly, after trying all 100 Kool-Aid flavors, they go back to the one flavor that hits their taste buds just right. Nancy and dizzy could be Sharkleberry Fin Kool-Aid. Bruce could be Purplesaurus Rex Kool-Aid. Bluwolf could be Pink Swimming Go Kool-Aid and Dinares gurus could be Peach Mango Kool-Aid (sounds tropical). I know Paddy is Incrediberry Kool-Aid.

I have a friend who asked me the other day if I'm still drinking the Kool-Aid. He's a good friend but I regreted deeply and sincerely that I gave him 500 T notes. So I go on to tell him how Kool-Aid has changed my life and it's the best tasting sugar filled, insulin spiking, artificially colored drink in 12 super universes. And how after the sugar crystals become one with the H2O the result has been a life-changing experience. So he asked if, in a trillion to one shot, Kool-Aid ever comes out with Champagne Kool-Aid, if I would hook him up. Good trade. I said you have a deal, at which time we pulled out our Navajo leather handled bone knives, placed them across our palms and swore a blood oath. Very dramatic in this neck of the woods, we are.

Looking back I should have asked how's the Kool-Aid he's been drinking. Still going to church? Putting money in the basket that goes to the vatican? That's Pope Pizza Kool-Aid. Still listing to Rush and supporting Trump? That's Canned Ham And Thousand Island Kool-Aid. Still watching every NBA tourney game? Lebron Lemonade Kool-Aid. Drink up, buttercup.

But as for us on the eve of our destiny, enjoy your Kool-Aid everyone. Zesty Zim? Delicious Dong? Righteous Rial? Yowsa Yuan? Prosperity Peach? Ascension Apple? We deserve it. Wear it like a badge of honor. With pride. Without much proof to hang our hats on, we reached for that brass ring together. We took a leap of faith together. We will get there together. We will drink from the fountain of prosperity together. And maybe someday, the term "drink the Kool-Aid" will remind the universe of the few chosen ones with the faith of a mustard seed in this little thing called the RV who went on to change the world (with a little help from their friends). Drink the Kool-Aid? Damn straight I drank the Kool-Aid.

And that's the word.

When you all 'drink' your Koolaid, just add a tablespoon of polyethylene glycol- It will preserve your stupidity, permanently-