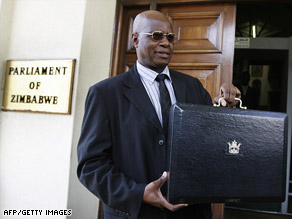 "Even in the face of current economic and political challenges confronting the economy, the Zimbabwe dollar ought to and must remain the nation's currency, so as to safeguard our national identity and sovereignty. ... Our national currency is a fundamental economic pillar of our sovereignty," said Gideon Gono, governor of the Reserve Bank of Zimbabwe.
"Accordingly, therefore, this monetary policy statement unveils yet another necessary program of revaluing our local currency, through the removal of 12 zeros with immediate effect."
The move means that 1 trillion in Zimbabwe dollars now will be equivalent to one Zimbabwe dollar.
The old notes -- with the highest being 100 trillion dollars -- not enough to buy a loaf of bread -- will remain valid until June 30, after which they will cease to be legal tender. One U.S. dollar is trading above 300 trillion Zimbabwe dollars.
This third attempt to lop off zeros comes barely six months after the Zimbabwe government last adjusted its currency as it continues to lose value.
World-record inflation estimated to be in the billions of percent -- but officially at 231 million percent as of July last year -- has quickly eroded the currency's value again and again. The highest note on the new set is 500 Zimbabwe dollars.

Re: ZIM - Deletion of Zeros

From what I have read, the old zim was completely finished, done, over-and-out mid 2015.  There was no action, in any way, after that date.  The old zim is nothing more than a novelty.