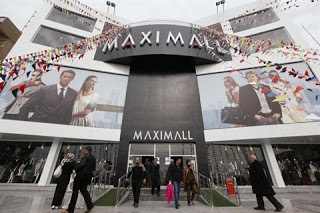 BAGHDAD: Foreign investors seeking a foothold in Iraq take heed: You’ll need a healthy dose of patience, a flexible schedule and a love of tea. Nearly nine years since the U.S.-led invasion that toppled dictator Saddam Hussein, Iraq remains a state-centric economy and, beyond oil, private businesses have yet to play a significant role in the rebuilding of the once thriving Middle East bread basket.

Infrastructure remains dilapidated after years of war and economic sanctions, and investment is needed to reform banking, build houses and roads and fix a chronic electricity shortage.
That means plenty of opportunities for investors, but foreign executives already on the ground say it can take more than a year to become operational in Iraq, where security is one of the most costly risks.

Taking the time to build relations with local partners is the key to success, they say.
“Nothing is fast in Iraq,” said Alan Morrell, vice president of American bottled water firm Oasis. “We’re going to have to start with tea and relationship building and we may dance for three or four months if it’s a big deal. If it’s a simple deal, we might dance for two weeks, but we’re going to dance.”

Attracting foreign investment is essential to the rebuilding of Iraq and the OPEC-member state has already signed a series of contracts with oil majors to develop its vast oil reserves – the fourth-biggest in the world.

Iraq set a goal to attract $86 billion in investment by 2014 under a five-year economic development plan. The infrastructure, housing and electricity sectors need the most development.

The National Investment Commission was created in 2006 to facilitate the process for international firms. It offers “one-stop” shopping, including help with visas, registering a company, and housing and security for investors during a first visit.

NIC chairman Sami al-Araji said dozens of companies contact him a month regarding business opportunities in Iraq. Iraq’s market – an educated populace of 30 million with big requirements after years of war and sitting on huge oil reserves – is considered a potential gold mine in a weak global economy.

But risk factors – corruption, security against an ongoing and lethal insurgency and lack of legal safeguards – are high.

“I don’t know anywhere else in the world where it’s more essential [to have a local partner]. There’s so much uncertainty, so many unknowns to be navigating,” said James Hogan, former chief executive of banking giant HSBC’s business in Iraq.

“Even before you navigate, you’ve got to understand the socio, economic, political drivers. And it is complex.”

A lack of clear regulation makes even a simple process like obtaining a visa an arduous task.
According to Araji, getting a 10-day single entry visa to Iraq should take four to five days and a six-month to one-year multiple entry visa about 10-14 days. Many foreign investors say it has often taken months to get visas for themselves or their workers.

Most businessmen say getting a good Iraqi lawyer should be the first step, especially to assist with licensing. The cost of a lawyer to facilitate registering a company can range from $1,000 to $40,000, investors say.

Some investors say the sheer number of different licences needed makes the process of starting a business lengthy. Each ministry operates separately and has different requirements. “We admit that right now we have some difficulties time wise but we are in the process of trying to simplify it,” Araji said.

While the banking sector is undergoing reform with the help of the World Bank, Iraq remains a cash-driven society. At the height of the war, it was common for businessmen to carry suitcases of cash into the country. Investors can transfer money directly into bank accounts but some still use bags stuffed with greenbacks to pay for services.

“They’re not big bags, they’re very normal. Like the ones you get from the supermarket, just not transparent,” said Daniel Zamfiropol, Iraq branch manager for Romanian firm Octagon Contracting & Engineering.

Electricity is intermittent and having a generator is a necessity. Businessmen say fuel for generators can cost around $3,000-$8,000 a month.
While high overheads, low initial returns and delays in licensing are frustrating, many investors say the steepest learning curve is understanding the culture.

“What we found is that Iraqis don’t appreciate a direct conversation of pressure associated with their performance. They would prefer patience and ongoing communication and relationship building,” Morrell said.

“In a Western culture, we’re used to going in and saying ‘it’s your job, sort it [out], what’s the problem?’ and demanding services. In this culture, that’s not what they’re looking for.”
Face-to-face communication is highly valued but telephone calls and text messages are also acceptable. Iraq did not have a mobile phone industry under Saddam and the sector has since boomed. Emails are rarely answered.

“I stopped relying on emails as a means of communication. Either they don’t get read, or even if they do get read, they might not necessarily generate a reply,” said Hogan.
So what are the essential rules for doing business in Iraq?

“Throw your timeline out the window, stick to your budget, and your plan needs to be able to be fluid,” Ground Works President Greg Holmes said.