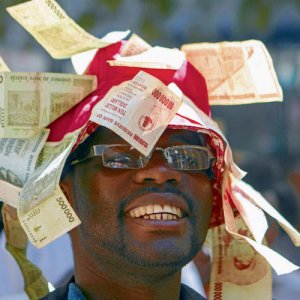 Zimbabwe’s economy is in intensive care because it does not have a national vision to grow it, the Affirmative Action Group has said.

The country, currently saddled with over $10.8 billion debt, is suffering from a severe liquidity crisis coupled with high unemployment and massive company closures, NewsDay reported.

This is despite the fact that every five years, government is coming up with economic blueprints in a bid to stimulate economic growth.
Speaking at a business breakfast meeting organized by Global Shapers Bulawayo hub, AAG Matabeleland chapter president, Reginald Shoko, said the country does not have an economic vision.

“What we have as a problem economically is that our planning is always short term. Government programs are always five years. When you want to turn or develop an economy you need a long term plan. Look at the African Union, it has already got a plan for 2063, but we are talking about ZimAsset (economic blueprint) which expires next year,” Shoko said.

“We need to have a plan on how we move forward the economy. So we need to plan and discover what our corporative advantage is. If technology is what we can offer to an economy, let’s churn more of our graduates and entrepreneurs on technology.”

Shoko said the world was in dire need of organic products, but Zimbabwe was failing to take advantage of that despite her economy basing on agriculture. He said Zimbabwean beef was in demand in Texas but the country did not have capacity to serve that market and South African beef has taken over.

Shoko said Zimbabweans need to work together for a common purpose like they did when coming up with the new constitution in 2013.

Fund managers in Zimbabwe are shunning monetary assets and opting for real assets amid growing fears that the country’s economy is facing a crisis.

Inflationary pressures have been mounting since the central bank introduced bond notes. Their value is at par with the US dollar, the country’s monetary authorities say. It is backed by a $200 million bond facility from the African Export-Import Bank.

Prices of goods have been rising since the bond notes were introduced, with most shops setting up a three-tier pricing system—US dollars in cash, bond notes and bank cards. Hard currency normally expedites external bank payments. Bond notes and card payments are accepted grudgingly.

The bond currency’s value on the black market, a good gauge of confidence in the unit, is weakening, with some forex dealers on the street discounting the currency. Those seeking to buy US dollars are paying an extra $2 in bond notes for $100 or a premium of 2%. For groceries, one can pay a premium of up to 5% when not using US dollars and paying with a bond note. One can be charged a premium of as much as 8% when using a card.

Makes one want to go out and buy a few trillion just to paper the bath room.

As I predicted when they started talking about the bonds and the pooroos started using them in their hype.
*****************
Trust but Verify --- R Reagan

I'm hearing that cocoa beans are a hot commodity, along with diamonds at DeBeers Consolidated Diamond Mines- Cocaine is another HOT seller, along with Purple Diesel!

remember terbo when efhutton speaks you listen. he said what looks bad might go up up upand that's from the zimmeister

I'm talking to the Zim meister right now, and he said it is very promising-

Similar topics
» Mobilize international support Iraq's economy A contingency plan for the provinces facing security problems
» Council Baghdad: We are facing problems in the transfer of powers with the Ministry of Health
» US dollar creates more problems for Zimbabwe
» Can the rand rescue Zimbabwe’s economy?
» Zimbabwe: Chinese Panic Over Zim Economy