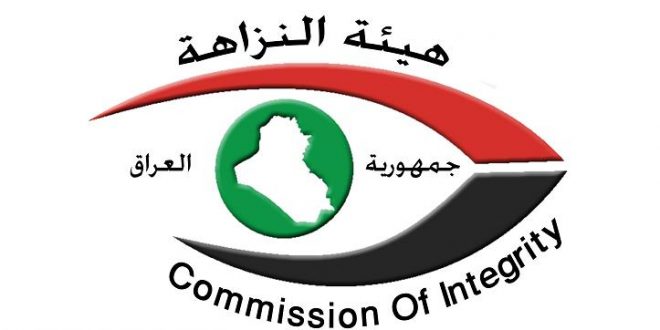 Integrity Commission revealed on Tuesday to prevent waste and recover more than 2.5 trillion dinars to the state treasury over the past year.

The head of the Hassan al-Yassiri, during the meeting held to announce the annual report of the Commission for the 2016 press conference, "The amounts that have been retrieved or issued court rulings reply, or that have prevented or body stopped wastage during the year 2016 amounted to (2,599,814,370,554) trillion dinars," stressing the issuance of (31) an arrest warrant against the 17 ministers and rank shall be fixed, and (184) arrest warrant against 84 senior officials and directors-general, and of them are still in a position of responsibility. "

"The Commission was able to resolve (13863) communications and news and the issue of punitive through 2016, and achieved the percentage completion rate of 77%," explaining that "the resolution of complaints received for body ratio during 2016 was 100%, and so decisively all communications communication guestrooms 2001" .

He pointed out, "it was the resolution (2001), a communiqué by 100% and 3243 informing by the completion of 77%, and the issues of penal (8619) 73% of the total 11,825 criminal case body referred to the competent court," noting that "the number of defendants referred to the trial court during the the same year amounted to (2512) accused, including 16 ministers and their grade from the Cabinet, where he was issued a decision against them 22 of the assignment, and the number of referrals to the elimination of special grades and general managers 127 accused, issued a decision against them 191 referral. "

He stressed that "investigations body led to the issuing judicial authorities for (3198) warrant, executed them 836 order, has not carried out the competent authorities of third-party law enforcement (782) is of them, by completion rate of 52%," calling on the authorities to "the need to adhere the implementation of the orders, serve the public interest, and in tune with the reforms demanded by everyone. "

Among Yasiri "The number of criminal cases that emerged from the work of field teams investigative audit that is familiar reached (31) issue of penal issued a judiciary which dozens arrested and recruitment warrants for senior leaders in these institutions," explaining that "the work of those teams included the ministries of justice, agriculture, health and bank Iraqi trade, as well as authored roving teams of inspection kept secret in the ministries of transport, finance, industry, labor and immigration, education, construction and housing, in addition to the institution of political prisoners, to monitor the performance of (46) circle in those ministries to make sure the service provided to citizens level through (134) inspection visit carried out by the those teams, ".anthy 3