Sikhs to be allowed to wear beards, turbans in Army uniform

Sikhs to be allowed to wear beards, turbans in Army uniform 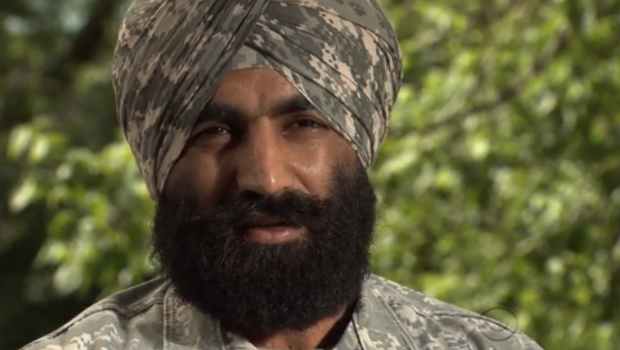 Earlier this year, Captain Simratpal Singh became the first active duty Sikh American soldier in 35 years to be allowed to serve while wearing his religious turban and beard on active duty.

The Secretary of the Army has issued a directive that will allow Sikhs to wear beards and turbans in uniform, CBS News’ national security correspondent David Martin reports.

Previously, a Sikh had to get permission from the Secretary of the Army. Now approval can be granted at the brigade level, which is much further down the chain of command.

Male observant Sikhs often cover their heads with turbans, which are considered sacred, and refrain from shaving their beards.

The change comes decades after President Ronald Reagan passed an executive order in the 1980s that called for all troops to look uniform, which meant facial hair and religious head wear were not permitted. 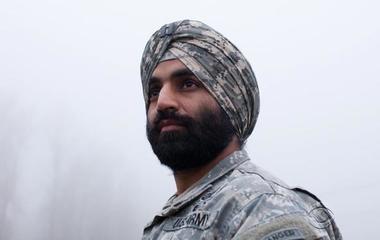 Earlier this year, Capt. Simratpal Singh became the first active-duty Sikh American soldier in 35 years to be allowed to serve while wearing his religious turban and beard on active duty, CBS News’ Don Dahler reported. Singh had been forced to shave his beard and remove his turban back in 2006, on his first day as a cadet at West Point.

More recently, he decided to stand up for his beliefs and took the Army to court seeking a religious accommodation. Singh won, after a decade of service.

“After 10 years I was like ‘Wow, it finally happened!’ And I was extremely excited about that,” he said.
The New York Police Department has also changed its uniform policy, CBS New York reported. Instead of fitting a turban beneath their department-issued caps, Sikh police officers can now wear turbans that have the NYPD insignia attached.

Officers must first get approval and the turbans must be navy blue, the Associated Press reported.

“I think it’s going to give people the opportunity to join the police department,” Police Commissioner James O’Neill said. “If I’ve got my numbers right, we have about 160 people from the Sikh community and hopefully this change of policy, we’ll be able to get more people to apply.”

O’Neill announced the new rules last week following a graduation ceremony for new police recruits, and he said the change is long overdue.

Sikh officers will also be allowed to grow beards up to a half-inch long. Beards were forbidden because they interfered with wearing gas masks.

Re: Sikhs to be allowed to wear beards, turbans in Army uniform

Did you know that whenever a gurdwara (Sikh temple) is built, it MUST be built with a kitchen so that food can be prepared and served? Food is served to anyone who comes - whether they are Sikh or not, whether they attend the ceremonies or not - anyone at all.

They oppose the Hindu caste system, believe in equality of men and women and all races. Historically, many of them died fighting the oppression of the Muslim Mughals in India.

Similar topics
» Congratulating the Army al-Kaabi: the need to strengthen the military capabilities of the Iraqi army
» What To Wear To Vegas?
» Wear it if it fits
» Did Jesus Wear A Rolex?
» Uniform Commercial Code for Dummies