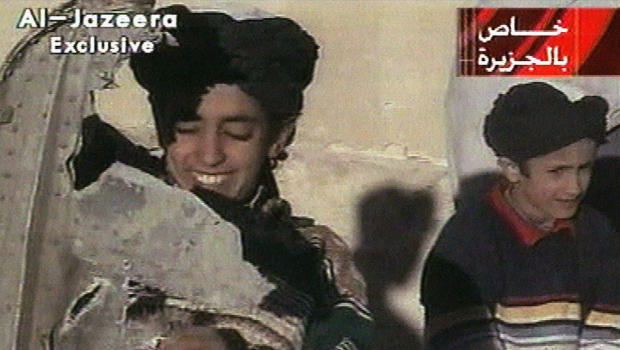 In this image made from video broadcast by the Qatari-based satellite television station Al-Jazeera Nov. 7, 2001, a young boy, left, identified as Hamza bin Laden, holds what the Taliban says is a piece of U.S. helicopter wreckage in Ghazni, Afghanistan, on Nov. 5, 2001. The boy at right is unidentified.

The State Department said Hamza bin Laden has been added to its Specially Designated Global Terrorist list after he was “determined to have committed, or pose a serious risk of committing, acts of terrorism that threaten the security of U.S. nationals or the national security.”

The State Department says the younger Laden - in a 2015 audio message - called for acts of terrorism in Western capitals. In an audio message last year, he threatened revenge against the U.S. and warned Americans they would be targeted at home and abroad.

“Hamza bin Laden is actively engaged in terrorism,” the State Department said, adding that terrorism designations deny individuals access to the U.S. financial system and “can assist or complement the law enforcement actions of other U.S. agencies and other governments.”

Al Qaeda founder Osama bin Laden was killed by U.S. special forces in Pakistan in 2011.
The State Department also announced penalties against Ibrahim al-Banna, a senior member of al Qaeda in the Arabian Peninsula. He served as that group’s security chief and provided military and security guidance to its leadership.

Al-Banna wrote a 2010 article in AQAP’s English-language magazine, Inspire, hailing the Sept. 11 attacks as virtuous, according to the State Department, and threatened to target Americans both domestically and abroad.