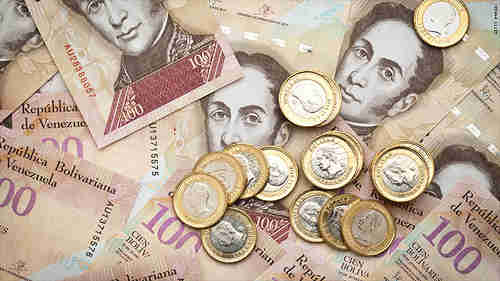 This entire pile of Venezuelan currency is probably worth less than one American dollar.

The hyperinflation of Venezuela’s currency is accelerating so rapidly that the money printing presses can barely keep up.

After a 180% inflation rate in the year 2015, Venezuela in December was forced to begin printing 500 and 1000 Bolivar bills, while phasing out the 2 and 5 Bolivar bills.

The larger currency not only did not solve Venezuela’s hyperinflation problem, it actually exacerbated it, by providing the means for prices to accelerate even more rapidly. In just one month, November of this year, the inflation rate was 67%.

This evokes memories of the stories of Germany’s Weimar republic, where the inflation rate reached 1000% per month by November 1923, with iconic tales of ordinary people buying a loaf of bread with a wheelbarrow of money. Venezuelans have already begun carrying bags of cash for every day transactions.

Venezuela used to be a wealthy country, thanks to oil exports, which are the country’s only major source of revenue. The charismatic leader Hugo Chávez wasted the oil revenue on pet projects, on buying votes, and on supporting Cuba’s failing economy. Today, Hugo Chávez is dead and oil prices have crashed. The current president, Nicolás Maduro, is increasingly using military power and violence to keep the population under control as the currency collapses. The new hyperinflated 20,000 Bolivar notes will give a boost to the economy that will last about a nanosecond, and then they’ll trigger even more hyperinflation and more shortages.

Debt-ridden Venezuela may be forced to officially default in mid-December. Venezuelanalysis (22-Feb-2016) and International Business Times and CNN Money

In a sense, Zimbabwe is a few years ahead of Venezuela. Zimbabwe has already gone through its hyperinflation phase.

As recently as the 1999, Zimbabwe was a breadbasket of Africa, exporting up to 500,000 metric tons of surplus food. By 2003, Zimbabwe was starving. What happened during those three years was a Marxist socialist “land reform” program by Zimbabwe’s president Robert Mugabe that confiscated 4,500 white-owned commercial farms and redistributed the property to his own Shona ethnic group.

After 2003, more and more Zimbabweans have been dying of starvation, because Mugabe has destroyed the farm infrastructure. By 2008, the official rate of inflation was 231 million percent. By 2009, 35 quadrillion Zimbabwe dollars were worth just one US dollar. Zimbabwe began to use the dollar, the rand and the euro as its official currency.
Now Zimbabwe has introduced a new currency called “bond notes,” each one of which is said to be equal in value to one US dollar. The given reason for introducing the bond notes is that there are not enough US dollars in circulation, causing hardship for the people.

Incredibly, Mugabe is continuing is destruction of the economy. The word “indigenization” is used by Mugabe to describe confiscating a farm owned by a white farmer and giving it to one of Mugabe’s Shona tribe cronies, probably someone who doesn’t even know how to farm. That’s how Zimbabwe turned from the breadbasket of Africa into a major food importer.

So now Mugabe is extending his “indigenization” program from farms to all businesses, requiring all businesses to be majority owned by Zimbabweans, again mostly cronies from Mugabe’s Shona tribe. Zimbabwe continues to shut down businesses, including foreign banks, that do not comply with the indigenization requirements.

So anyone can see that this will end badly. The destruction of more businesses means that there will be fewer products available. In the meantime, the bond notes will have the same effect that the 20,000 Bolivar note is having in Venezuela — more bond notes for fewer products. It looks like Zimbabwe is on its second round of hyperinflation. Reuters and New Zimbabwe and Independent (South Africa)

Page 1 of 1
Permissions in this forum:
You can reply to topics in this forum
Who is online?
In total there are 72 users online :: 0 Registered, 0 Hidden and 72 Guests :: 3 Bots