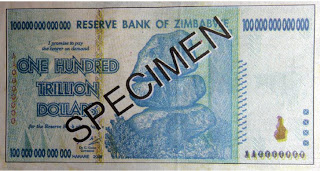 Less than two weeks after releasing a $50 billion note that could buy two loaves of bread, the dictatorship in Zimbabwe has released a $100 trillion note (see below). The current official exchange rate puts the value of the note at US$300, although the value deteriorates daily due to the 231 million percent inflation rate ravaging the country. Many believe the inflation rate is much higher. The informal market values it at US$30.

Zimbabwe, because of the great instability, cannot be considered a place for safe investing. However when the situation stabilises there will be many opportunities for purchasing assets there (especially using foreign currency). 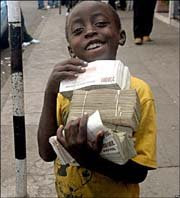 Zimbabweans are no longer using their valueless currency in the informal sector, preferring to do business in rands or US dollars.

The Zimbabwean newspaper reports that South Africa has shunned a proposal by Zimbabwe to adopt its currency saying the inflation in the neighbouring country will affect its economy.

However, in his leaked draft economic reform programme dubbed the Comprehensive Economic Reforms Needed to Turn Around the Economy, central bank governor Gideon Gono has announced that the rand will be adopted informally.

He said the move was meant to stabilise prices in the collapsed economy, that was once the pride of Africa.

“It is imperative that Zimbabwe informally adopts the rand alongside the Zimbabwe dollar, to eliminate distortions associated with the use of multiple currencies,” said Gono in the draft document.

“The randfying of the Zimbabwean economy is envisaged to give substantial impetus to current efforts geared at stabilising prices. This will lay a solid foundation upon which successful economic recovery initiatives will be anchored.”

The rand is already being used informally, and remittances from Zimbabweans in South Africa ensure a flow of rands into Zimbabwe. To adopt the rand formally, Zimbabwe would need to join the Multilateral Monetary Area, MMA. However, for Zimbabwe to become a member of the MMA it would need to align its fiscal and monetary policies with South Africa for the formal use of the rand to be effective and be sustainable. This seems unlikely under the present regime.

This issue first raised its head in July 2007, when things were not as bad as they are now. We reported the following:

We look at the proposal that Zimbabwe joins the rand monetary area (now known as the multilateral monetary area, MMA), and adopt the rand as its currency. This could be either directly as rand banknotes, or as a new Zimbabwean dollar linked to the rand on a one-for-one basis. To ensure equality and confidence, the rand would be legal tender (e.g. it can be used to pay for goods and services) in Zimbabwe.

Before discussing this more, it is useful to briefly discuss the rand and how it is valued and how its value is maintained. The rand (ZAR or R) is the national currency of South Africa and the South African Reserve Bank, SARB, (central bank) has the responsibility for supplying it and ensuring it keeps its value for the purposes of buying and selling goods and services.

So, ideally, when you buy a loaf of bread for R8 rand today it will still cost R8 this time next year (no or zero inflation). In reality, there is some inflation, especially in developing countries. It is usual to measure the internal (domestic) value of a currency against a basket of goods and services from time to time (the change in the level of inflation) and externally against a strong foreign currency (the exchange rate), e.g. the United State dollar, USD.

The multilateral monetary area, MMA, is well established and includes South Africa, Namibia, Lesotho and Swaziland. The rand is legal tender in these countries and their currencies are pegged to it so that their exchange rates with foreign currencies such as the US dollar are the same as the rand’s. A new MMA Zimbabwean dollar would be freely convertible into rand on a one-to-one basis (that is, at par).

The main advantage for Zimbabwe in joining the MMA is the stability of the exchange rates and the value of the currency for purchasing goods and services. Exporting and importing of goods and services to MMA countries involves no risk that the exchange rate will change for the worse – the prices are essentially in rand and thus the effect is the same as a supplier in Gauteng “exporting” to a buyer in the Western Cape.