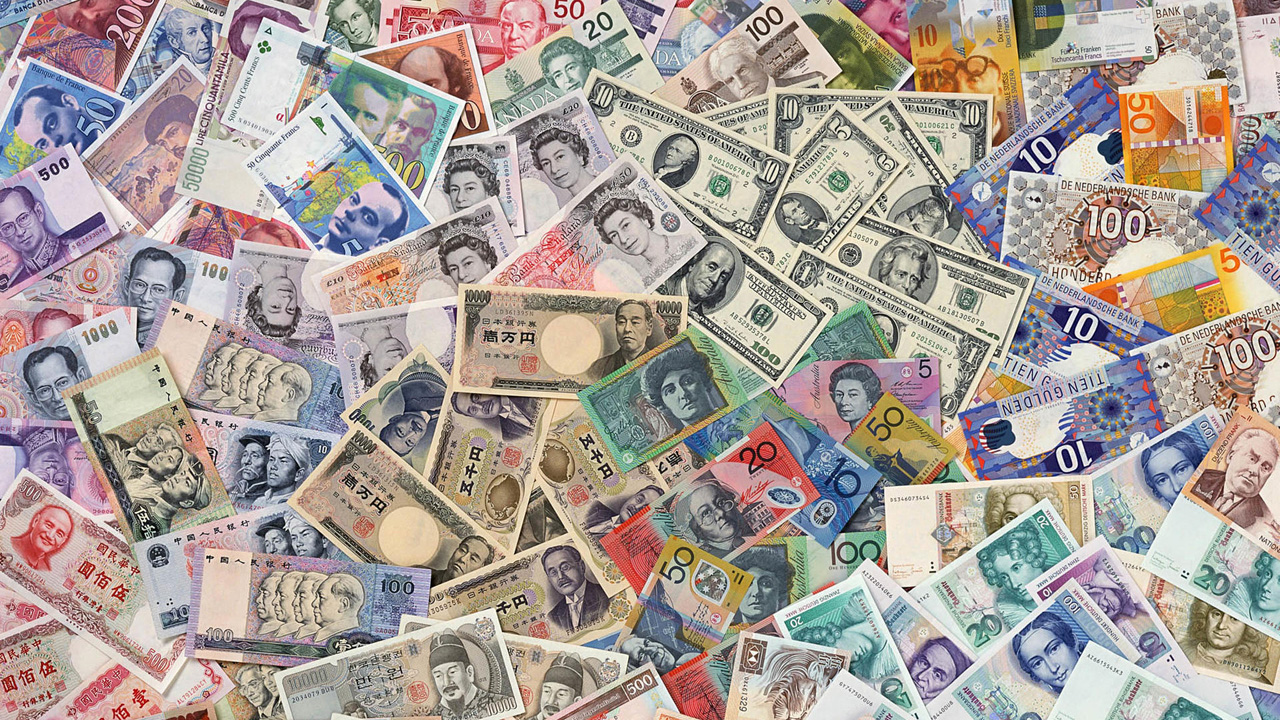 Most Americans have probably heard other people complain about the “weakness” of the American dollar. How can currency be weak? A weak currency is one with a value that has depreciated over time. When someone says that the American dollar is weak, they’re basically saying that the dollar isn’t worth very much. So, this begs the question: what are the most valuable currencies in the world? In this article, I’ll break down the top ten most valuable currencies in the world, discussing how they compare to the American dollar and how their given economies allow them to be so strong. 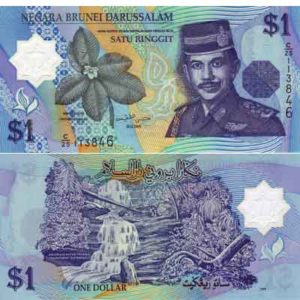 The Brunei dollar has been in use since 1967 by the Nation of Burnei, as well as Singapore. The bill comes in denominations similar to that of the American dollar: B$1, B$5, B$10, B$50, and B$100. Although this currency is also spent in Singapore, it is predominantly used in the country of Brunei. Brunei is a sovereign state in Southeast Asia, and although it may be small, it has a fairly wealthy economy. The majority of their GDP comes from crude oil and natural gas production, and Brunei is actually the fourth largest producer of oil in Southeast Asia. Not only that, but the country has also recently tried to make itself a small hub for international travel, with Royal Brunei Airlines being founded during the mid-1970s. One Bruneian dollar is worth approximately .73 American dollar. 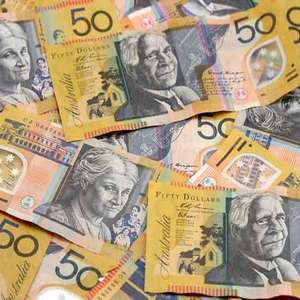 This next currency is a little less obscure. One Australian dollar is worth .76 American dollar. Although the Australian dollar is obviously used primarily in Australia, it is also used in Nauru, Tuvalu, and Kiribati. (It is also used unofficial in Zimbabwe.) Australia’s economy is as strong as you would expect from one of the wealthiest countries in the world, relying primarily upon the country’s banking, manufacturing, and mining. Australian notes come in denominations of A$5, A$10, A$20, A$50, and A$100. The notes themselves are pretty interesting, too. Australia was actually the first country in the world to implement a system of bank notes that were made of polymer. This unique note material means that Australian money is cleaner and easier to recycle than traditional paper money. 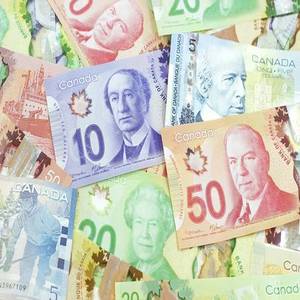 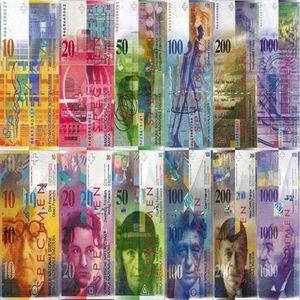 Is there anything that the Swiss can’t do? The Swiss franc is the next valuable currency on our list, with a value of 1 Swiss franc per 1.03 American dollar. Swiss franc banknotes come in 10, 20, 50, 100, 200 and 1,000 denominations. The Swiss franc is characterized by its use of different colors in its banknotes, which are yellow, red, green, blue, brown, and purple. They’re obviously used in Switzerland, but they can also be found in Liechtenstein and Campione d’Italia as an official currency. The strength of the Swiss franc is almost a no-brainer. Switzerland is one of the wealthiest countries in the entire world, being home to a massive technology sector and a host of different major corporations, like The Swatch Group and Nestle. 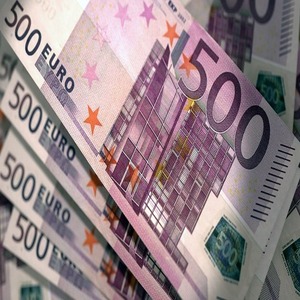 Of course, you can’t have an article about currency without talking about the euro. The euro’s banknotes come in denominations of €5, €10, €20, €50, €100, €200, and €500. Although it may not be the most valuable currency on this list, the euro is definitely one of the biggest currencies on this list. The euro is used throughout the entire Eurozone, which contains over a dozen countries, including Austria, France, Germany, and Italy. For hundreds of millions of people across several different countries, the euro is the golden standard, so to speak. In terms of value, one euro is worth around 1.12 American dollar. The reach of the euro is its greatest strength, but it also serves as its greatest weakness. In 2012, the euro’s value dropped pretty significantly due to economic trouble in Greece and Spain. 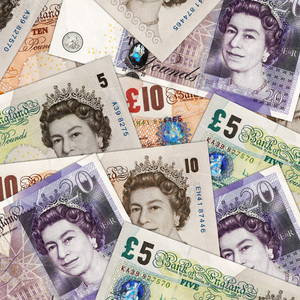 Finally, we are brought to the British pound sterling. Like the Canadian dollar and the euro, the pound is one of the world’s most frequently traded currencies. One pound is worth approximately 1.32 American dollars. Not only that, but the pound also holds the honor of being the oldest currency in the world that is still currently in use. Its use can be traced back as far as Anglo-Saxon Britain, which would make the pound around 1200 years old. The pound is used most frequently in the United Kingdom, as well as Guernsey, Isle of Man, and Jersey. British pound banknotes come in a variety of different denominations, with the most commonly used notes being £5, £10, £20, and £50. Like the euro, the British pound has lost a great deal of buying power over the years. However, it is still a global superpower as far as currencies go. 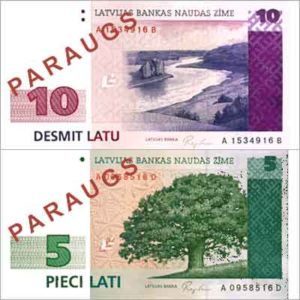 So, it may sort of be cheating to place the Latvian lats on this list. Why is that? Starting in 2013, Latvia has begun to phase the lats out in place of the euro. Today, it is technically not in use by any country. However, the lats still has value in both world and local exchange. Today, one lats is worth approximately 1.61 American dollars. Prior to being taken out of circulation, the lats came in banknote denominations of 5, 10, 20, 50, and 100 latu. As far as currency goes, the lats was pretty young — the first lats were introduced into Latvia in 1922. Originally, they were implemented as a replacement of the Latvian rublis, which was the currency used by Latvia immediately after they had won their independence from Russia. Although the lats will be dead within a few years, it still holds a great deal of value. This next currency is the first currency on the list to only be used by a single country. (I don’t think the lats really counts, considering the fact that it isn’t actually used by any country anymore.) The rial is only used in the country of Oman. One rial is equivalent to around 2.60 American dollars today. Its banknotes come in denominations of 100 and 200 baisa (which are like the cents to the Omani “dollar”) as well as 1/2, 1, 5, 10, 20, and 50 rials. Before the rial was implemented in Oman in 1970, the country had primarily used the Gulf rupee and the Indian rupee. Oman started to roll out coins in 1940, and it took a few decades for the new currency to fully take hold. The value of the rial is fairly stable, supported by Oman’s powerful oil and gas-based economy. 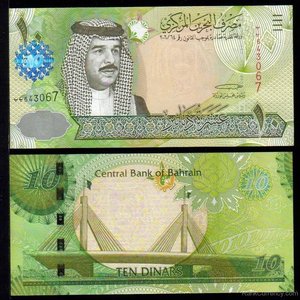 You may have noticed that a common theme among valuable currencies is an economy backed by the oil industry. The Bahraini dinar is sort of unique among the other elite currencies in that it doesn’t rely upon oil exports. The Bahraini dinar is only used in Bahrain, and it is valued at around 1 Bahraini dinar per 2.65 American dollars. The dinar comes in banknote denominations of BD 1/2, BD 1, BD 5, BD 10, and BD 20. Until 1965, however, Bahrain’s currency consisted entirely of coins, broken up into different denominations of “fils”. The Bahraini economy was the first post-oil economy to exist in the Persian Gulf. The bulk of its economy relies upon banking, financial services, and tourism. In 2006, reports showed that Bahrain actually had the fastest growing economy in the Arab world. The value of the dinar has benefited from this stable, diversified economy. 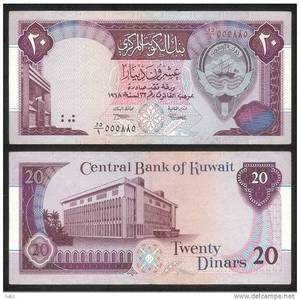 Finally, we are brought to the most valuable currency in the world: the Kuwaiti dinar. The Kuwaiti dinar is solely used by the people of Kuwait, and one dinar is worth a whopping 3.31 American dollars. Like the Bahraini dinar, the Kuwaiti dinar is broken up into different denominations of “fils”. Currently, Kuwaiti dinars can be found in banknotes of 1/4, 1/2, 1, 5, 10, and 20 dinars. During Iraq’s invasion of Kuwait in the 1990s, the Kuwaiti dinar was replaced by the Kuwaiti dinar, It has since been re-implemented, however. How is this dinar so strong? Kuwait actually possesses the fourth highest per capita income in the world, largely thanks to the country’s massive oil reserves. The mass majority of Kuwait’s exports consist of both crude and refined petroleum oils.

Re: Top 10 Most Valuable Currencies in the World

Re: Top 10 Most Valuable Currencies in the World