I wonder how much money Dave is making at these workshops.

Scroll Down for Workshop Information, Registration Payment, Schedule and Agenda

Are we ready for the “New Paradigm of Money and Life?”  We all want to experience and benefit from the upcoming RV/GCR, you wouldn’t be reading this information if you did not!  But, the question is…….do we know what to do when the shift takes place?  This workshop will give you the reason behind the RV/GCR, and the part we are playing in this World-Changing-Event.  We will talk about the shift in the role money and banks play in changing our world.  We will also discuss the potential strategies and plans to maximize your personal benefit.  In the last session we will discuss how to use your money to attract joy, happiness and fulfillment into you life…..as well as helping others in creating a new and better world.

Costs: Pre-registration:
Individual: $129
Couple: $99 each (applies to any two or more registering together)

You may reserve your pre-registration seat with a deposit of $50 for each individual, with balance paid at the door.  All deposits and registrations are non-refundable.

Sometimes you can learn things from the way a person denies something. The choice of lies can be almost as helpful as the truth

I notice Dave didn't mention the Galactic Elders and the fact that he has been a regular visitor on the mothership etc in his pitch.  Though he likely should have since that would weed out anyone with a functioning brain and he would be able to bilk the rest with impunity.
*****************
"Now my own suspicion is that the Universe is not only queerer than we suppose, but queerer than we can suppose." J.B.S. Haldane 1927

145 people attending Dave's workshop.  Not too bad for a day's "work".

@jrg wrote:I notice Dave didn't mention the Galactic Elders and the fact that he has been a regular visitor on the mothership etc in his pitch.  Though he likely should have since that would weed out anyone with a functioning brain and he would be able to bilk the rest with impunity.

Although he hasn't claimed being on a mothership, Dave has done several radio shows on the Anunnaki and how the Dragon Family are their descendants.  He also believes Michael Lee Hill is a Nephilim, an Anunnaki - Human hybrid. This is based on a blood test that shows an elevated level of an enzyme.  In Dave's world, this means Mr. Hill is not human.

He said he believed the Ambassador of the Red Dragon Family was an angel.  So even angels can spout BS and not follow through on what they say.

Dave has also met with a member of a highly secretive group that has technology and healing methodologies that are far beyond what we know today and work on the "quantum level".

Despite meeting all these colorful folks, nothing has really come of it, in terms of day to day life.

@Ssmith wrote:145 people attending Dave's workshop.  Not too bad for a day's "work"

Dave has said this is double the usual attendance, so past workshops have brought in anywhere from $6k to $10k.

I wonder how that compares to the other gurus and what they bring in from the faithful? 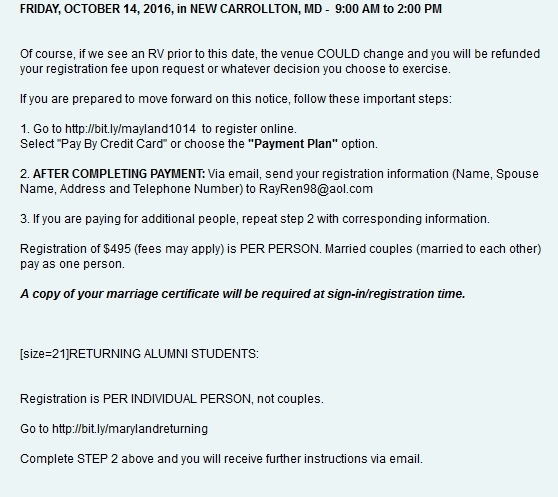 @Purpleskyz wrote:If a couple or multiples sign up together it is 99.00 each person so either way it adds up to a nice income he is bringing in for himself.

Yes, my bad on the math, hopefully I have it correct above.  Even at one workshop per month, and he makes more than most people do working the 9 to 5 gig 40 hrs/week.

It reminds me of the MLM gigs, where people make more on training than they do on selling products.  Dave makes more $$ talking about the RV and GCR which may or may not make any $$ for anyone except those on the inside track.

Page 1 of 1
Permissions in this forum:
You cannot reply to topics in this forum
Who is online?
In total there are 58 users online :: 1 Registered, 0 Hidden and 57 Guests :: 2 Bots