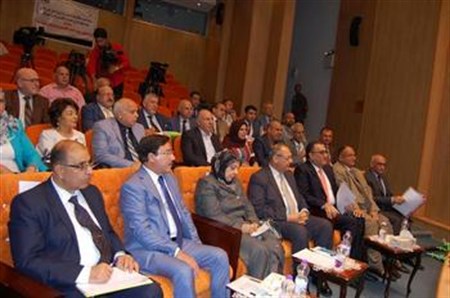 Set up the Iraqi Institute for Economic Reform under the auspices of the Iraqi Central Bank Governor Dr. Ali Alaguendoh entitled "Central bank: The policy of economic reform in the Mediterranean near term," the central bank's theater. "

A statement of the Institute, said: "The meeting was chaired by economist Dr. Raed Fahmi, in the presence of a large number of officials in the state represented by the Governor of the Central Bank, Dr. Ali Keywords Baghdad Provincial Council and Chairman Dr. Riad dentex and a number of economists and observers from specialized in this regard and means of local and international organizations of different flags."

The statement added, in which experts and officials "occur in the monetary effect on the role of the central bank in achieving financial inclusion and the development of economic sectors to achieve the desired growth, as well as the challenges faced by monetary policy and the difficulty of reconciling with fiscal policy, referring to the decline and its impact oil revenues, the central bank's reserves."

He acknowledged the central bank governor, Dr. Ali Keywords, "the absence of fiscal policy in Iraq," and stressed that it is managed on the everyday problems and social pressures and not drawn for the future, "and was charged with the institutions' work for political interests disability monetary policy in the country, said Dr. Ali Keywords that" the reform process economic in Iraq are still at the beginning of the first stage where we note that there are institutions built and established political interests and note that it does not check the curriculum, who painted him, "stressing that" much Mangdaa facing economic reform strongly and are an obstacle to fiscal and monetary policy in Iraq.

He noted the central bank governor that "the Iraqi budget backward and not related financial programs and mature resources as they affect the financial stability," stressing "we are facing a great responsibility to address the financial crisis, where we continue to rely 95% on oil revenues and 5% of local revenues must therefore be thinking develop effective plans to address this crisis. "