It never fails. When meeting someone for the first time and explaining to them that my background is in currency trading, the response is almost always the same, “what do you think about the Iraqi dinar?”. When I finish chuckling to myself, I attempt to give my best explanation of the dinar revaluation. I guess maybe I should be more open-minded, after all, there are still kiosk in malls around America with the sole purpose to sell dinar to those that don’t know any better. What is the Iraqi Dinar Revaluation Scam?

For those that have no idea about the rant that is going to ensue, let me first explain what this whole Iraqi dinar revaluation scam is all about.

The Setup: The belief is that you can buy Iraqi dinar, the currency of Iraq, right now (cheap) with the hope that in the future the value is going to increase significantly due to political stability in Iraq.

It seems to me that the height of this dinar craze was in 2008-2009. Just about anyone that knew me, and knew my background then, was buying dinar or researching “buying dinar”. I must have preached enough sense into those that were asking because there has been a lull in that famous question. However, now that I am out on the road meeting new people from all over the world, it seems that the dinar craze may be catching a second wind.

So…is the Dinar Revaluation a Scam?

A Brief History Lesson of the Iraqi Dinar (my version)

Back in 1982, Saddam Hussein – through his almighty powers – set the value of 1 Iraqi dinar equal to $3.22 USD. It is important to note that when this rate was set, the currency was not freely traded on the open market. Thus, the valuation of the Iraqi dinar could never be revalued by the outside world. Fast forward to 1991, post Gulf-War, the Iraqi dinar had fallen to 1 Iraqi Dinar equal to $0.0003 USD. Quite the change.

This is where the argument picks up steam. 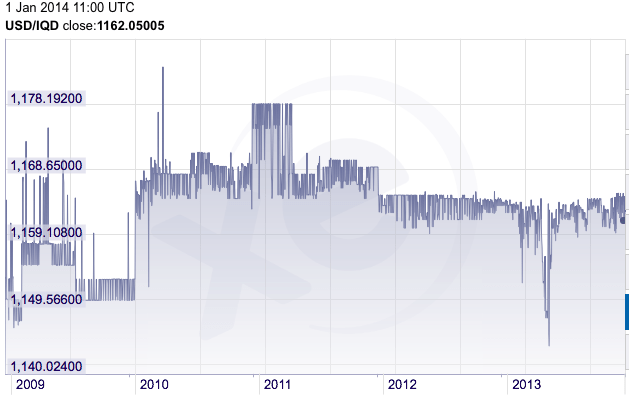 The snake oil salesmen, currently selling Iraqi dinar, will lead the public to believe that now that the United States has gone into Iraq, captured Saddam Hussein, and “straightened things out,” the Iraqi dinar is surely going to revert back to those 1980’s levels. Right now you can buy roughly 1,160 Iraqi dinar for a whopping $1 USD. Well all be damned, if I buy just $100 USD worth of them there dinars (currently equal to 116,000 dinar) and the price comes back to the 1980’s level, next thing ya know Jed’s a millionaire.

(If you didn’t get that joke watch this)

If you haven’t caught onto my sarcasm surrounding all that is the Iraqi dinar, let me provide you with the quick facts that I blast back to people asking me about it in the first place.

Lets just say that a miraculous turn of events happens and the Iraqi dinar is suddenly of equal value to the US Dollar. That is, the 116,000 dinar you bought today for $100 USD is now equal to $116,000 USD tomorrow. Cha-Ching! You hit the lottery didn’t you? Of course, so you set off to the same mall kiosk/internet site you bought the dinar from to begin with, laughing all the way. But wait, that same kiosk/internet site you bought the dinar from doesn’t buy it back.

The Iraqi dinar still remains a currency that is not freely traded. Currencies such as the euro, yen, pound, etc. are traded daily, 24 hours a day, 5 days a week. Every day over four trillion dollars are exchanged on these markets. However, the Iraqi dinar is not one of them. I suppose if you had invested $100 into Iraqi dinar and suddenly it was then worth the same as the US dollar (now at $116,000, post revaluation), you could afford to fly to Iraq and exchange them yourself…

If that still wasn’t enough of a reason to believe that the Iraqi dinar revaluation is highly unlikely to happen in the fashion that has been portrayed by the best of internet marketers, I’ll leave you with one final note. Iraq is still inundated with massive debt. A country with massive debt is highly unlikely to go poof and make their currency on par with the US dollar. Sure, there might be a lot of oil in Iraq, but not quite that much. The exchange rate between the USD and Iraqi dinar has been virtually stagnant for 5 years. I equate buying dinar to lottery tickets, but with worse odds.

So there ya have it.

Now, how do most people I spend the time explaining this to respond? I don’t understand why, with all the odds stacked against you, that you would be interested in buying into a pipe dream. Nonetheless, the Iraqi dinar revaluation is likely, but revaluing to a rate anywhere near the USD, euro, pound, etc is highly unlikely. Maybe instead, you should buy into shares of the TheTradingTravelers.com???