The most damning character of human behavior is the inability to learn from history. And yet one of the things we are taught very early on in life is the saying: ‘Once beaten twice shy’. We are so dogmatic – almost to the point of foolhardiness – that we become spiteful even where good counsel can save our lives. 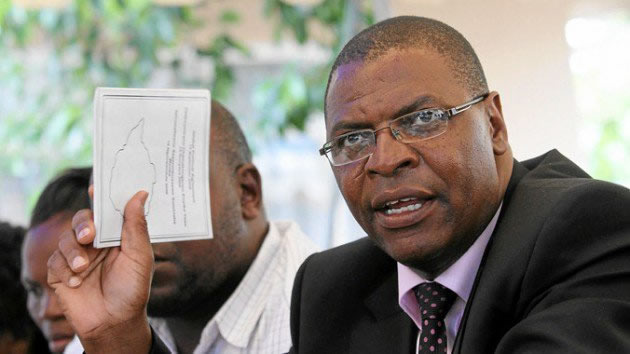 In isiNdebele, we have a saying: “Isala kutshelwa sibona ngomopho”. Literally translated means if you insist on ignoring advice, at a later stage, people will identify you by your bleeding nose!

On the ‘Anglo side’ of this proverb, there is controversy on whether it was scientist inventor Albert Einstein, Benjamin Franklin or Rita Mae Brown who said it, but the gospel truth remains: “Insanity is doing the same thing over and over again but expecting different results.”

I am a lawyer by training and profession and leader of a political party by choice. I do not profess any expert knowledge on economics and monetary policy. However much of the economic challenges which confront our country are basic common sense.

For example each of the downside consequences of the attempt to introduce bond notes and the recently announced monetary measures should be obvious even to the most lay person. We will return to these in my instalment next week.

My experience in politics, government and business gives me confidence that what most Zimbabweans resent of the Reserve Bank Governor’s inevitable ‘bond notes’ currency is understandable. Zimbabweans really want their own sovereign currency.

It would also give me maximum satisfaction had I to take over national leadership of a country in direct control of its currency. In other words, give me local currency any time and I would be the first in the queue.

Mangudya himself mentioned that even if he had injected the 200 million US dollars into the system, the money would have been sucked into the laundering black hole. In other words, pumping ANY money – not even bond notes – into a defective economic system cannot solve Zimbabwe’s liquidity crisis.

ZANU PF was in power during the hyper inflationary crisis. We joined in in 2009 and immediately arrested the hemorrhage. We left in 2013 and the country assumed its ‘crisis default mode’. Despite its near political monopoly, ZANU PF has failed to run this country, so Zimbabweans have no faith in whatever this government puts on the table of solutions.

In its current state, ZANU PF is interested only in political survival than economic development. This is why they are driving public expenditure up the cliff to retain a semblance of political relevance. They do not take kindly to advice; they do not allow citizen participation and they abuse the law. They cannot be trusted, even with the RBZ.

If I was Zimbabwe’s national president, I would first ensure and guarantee the constitutional independence of RBZ. As a lender of last resort and custodian of the country’s money supply system, the RBZ has to be run by individuals not indebted to any political party.

During his tenure as RBZ boss, Gideon Gono, who painstakingly kept each and every directive and each and every request he received from central government, excelled in financing ZANU PF electoral programs, often by raiding, albeit on instruction, corporate and individual foreign currency denominated accounts.

Only ZANU PF big wigs and boot lickers had access to the Treasury. Right now, citizens have been coerced into taking over a billion-dollar ‘quasi-fiscal expenditure’ debt that Gono incurred on behalf of the clueless government. Otherwise how can the bank play its oversight role while under the control of the ruling party?

What worries Zimbabweans most is not whether or not they have local currency in their pockets. We have had trillions of those before! – but what value did we realise from those notes? This is where participatory governance comes in. Since monetary and fiscal policy are interlinked, I would have sought the advice of CZI, ZNCC and BAZ before making conclusions about bond notes.

I would sit down with industry, commerce, agriculture and tertiary institutions to seek the best model of stimulating local production and capacity utilisation. An economy – like South Africa or Mauritius – that produces its own goods has better capacity to support local currency.

Zimbabwe takes out six billion dollars every quarter importing consumer goods, whereas this money can be used to re-capitalise industry and import raw materials to manufacture and create more jobs. As president, I would adopt a more conciliatory approach to indigenisation, so that investors have confidence that their property rights can be upheld if they pour in resources into our country.

John Mangudya’s assertion that bond notes will be one-to-one with the US dollar is not dissimilar to telling the nation that a chicken is of the same value as an oxen. South Africa has the leeway to ‘manipulate’ exchange rates in order to respond to the dictates of export markets.

We cannot do that because we import more than we export, but Mangudya claims he can stimulate exports using the bond notes as an export incentive. His formula makes no reference to capacity utilisation and cost of capital, so there is no stability he can bring to a currency by decree.

Our banks are short of money not because of large withdrawals or ‘informal pillow banking’, but simply because the economy is not generating and attracting cash. Had I been President of this country, I would not close mines and threaten to shut down multi-national corporations – because this repels money. Remittances from outside Zimbabwe cannot come into a banking system which even locals lack confidence in.

Mugabe and his ZANU PF cronies control agriculture and mining; they have secret deals with Russians and Chinese. These transactions are generally supervised by the central bank, but because cronies ‘run’ this bank, they can afford to exclude everyone else from this cash cycle.

Ironically, most none performing loans are associated with ZANU PF cronies who have swiped millions in loans from banks but refuse to pay back. They do not use the loans for local production, but speculative purposes. That is why our commercial banks now adopt mercenary and predatory bank charges to survive.

I would never preside over a government that borrows more than it needs, or spends more than it makes, because it squeezes the private sector from the borrowing matrix. Mugabe’s government runs a ten billion-dollar external debt and just under half of that in internal debts. Rather than forcing tax payers to pay government debts, RBZ must be closing the monetary tap to government which employs half a million unproductive people.

But because Mangudya has no institutional independence, he cannot control the government’s appetite for cheap money. What he has failed to achieve with government bonds he wants to attempt with bond notes.

With industry and commerce operating at below 35% capacity, this bloated government will never generate enough revenue to service its debts. I therefore urge this government to re-focus on the broader investment and industrial picture to attract money, stimulate local production, eliminate corruption and recover the billions of illegally repatriated monies. Printing bond notes is a crude, short term solution being done to buy time for ZANU PF in time for 2018 elections

"Mugabe and his ZANU PF cronies control agriculture and mining; they have secret deals with Russians and Chinese. These transactions are generally supervised by the central bank, but because cronies ‘run’ this bank, they can afford to exclude everyone else from this cash cycle."

The Professor admits not having any expert knowledge on economics and monetary policy and it's also obvious he is unaware of the Chinese elders, etc.  If only someone could get him in touch with Yosef, or the link to the next Wing-It call....or better yet, a ticket to Dave Schmidt's August seminar,  I'm sure it would all become clear to him.
*****************
>>>TNTBS's YouTube Channel<<<

Page 1 of 1
Permissions in this forum:
You can reply to topics in this forum
Who is online?
In total there are 69 users online :: 1 Registered, 0 Hidden and 68 Guests :: 3 Bots