Something Very Strange is Taking Place Off the Coast of Galveston, TX

Something Very Strange is Taking Place Off the Coast of Galveston, TX

I ACTUALLY SAW THIS ON MY VACATION. I HAVE ALWAYS SEEN TANKERS OUT IN THE HORIZON COMING INTO PORT, BUT THIS TIME THEY DIDN'T MOVE. THERE WAS ALSO MORE THAN NORMAL.

http://www.americanjournalreview.com/something-strange-taking-place-off-coast-galveston-tx/
*****************
Leadership is a potent combination of strategy and character. But if you must be without one, be without the strategy. - Norman Schwarzkopf, Jr.

OH YES HE WOULD TWIST IT INTO THE RV BEING IMMINENT :winky winky:
*****************
Leadership is a potent combination of strategy and character. But if you must be without one, be without the strategy. - Norman Schwarzkopf, Jr.

This has actually been going on for a long time, at least a year, probably longer. The reality is our oil storage capacity in the Gulf has been at or near 100% since at least this time last year. They have been building new storage capacity as quickly as possible, and filling it as quickly as they build it. The other issue is they can only off load the oil just so fast, and production has exceeded that capacity for a while. Some may also be owned by speculators gambling that prices will rise faster than their fees for the ship.

The suggestion that the oil is from Iraq is equally incorrect. Some might be, but the majority would not be.

OK, so here you can see that about 40% of our oil is produced domestically, and about 22% from our neighbors to the north and south. Most if not all of that would come via pipeline and/or rail. That leaves about 88% coming by ship, a little more than 1/2 comes into the US via the Gulf Coast.

This chart is a little old, but the best one I could find, and the numbers are close to the most recent figures I have seen. 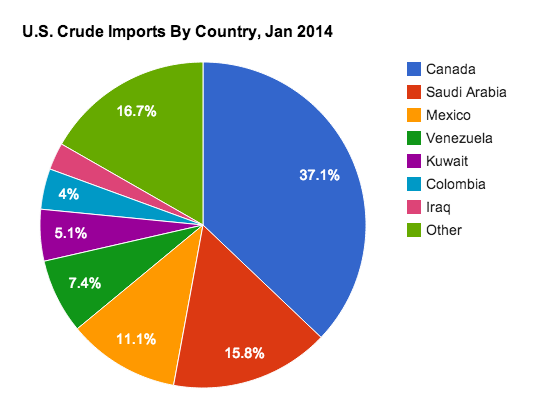 So of the approximately 88% we import 4% or about 3.5% of our total consumption comes from Iraq. There is not a chance there is a line of ships from Iraq waiting to off load off the coast of Galveston.

Similar topics
» Strange Place To Take A Nap!
» Is there a LOP taking place
» Poppy3 BIG CHANGES ARE TAKING PLACE AS THE NEWS TELLS US
» STORY BANK,"THE RV TAKING PLACE AROUND THE 1 OF THE YEAR", 29 DEC
»  "Trump Taking Over the Fed" - Jester's Place Chat Highlights 7/27/18