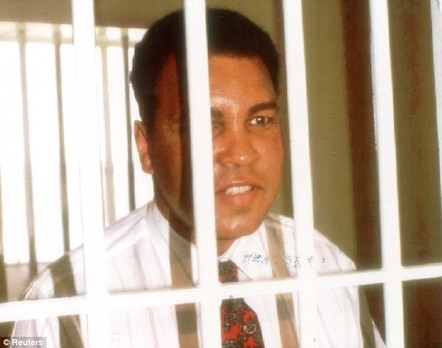 Muhammad Ali’s most famous act of social activism — one that would strip him of his best fighting years, cost him millions of dollars, forever alter his image and eventually send him into debt — began with one off-hand quote: [url=https://books.google.com/books?id=vcs5w384KZsC&pg=PA160&lpg=PA160&dq=Man,+I+ain%E2%80%99t+got+no+quarrel+with+them+Vietcong+1966+date&source=bl&ots=Y69dcllNzO&sig=k_tOL9pd4XvTsVbPRiQ9d2b8EnI&hl=en&sa=X&ved=0ahUKEwiMyp7e7YzNAhUEyyYKHbLLDYMQ6AEIOjAF#v=onepage&q=Man%2C I ain%E2%80%99t got no quarrel with them Vietcong 1966]“Man, I ain’t got no quarrel with them Viet Cong.”[/url][/ltr]

It was March 1966, and the U.S. military was escalating its fight in Vietnam. It began substantially lowering its standards for the draft so it could conscript more men, and call up men with lower IQs for 1-A service. This meant that Ali, whose Army-tested IQ score of 78 had been too low for the draft in 1962, was now eligible for unrestricted military service.


The boxer, who died Friday night at the age of 74, happened to hear this news while surrounded by reporters, and in a classic, boisterous knee-jerk reaction — I ain’t got no quarrel with them Viet Cong — he set off a years-long cultural revolution.


For the most famous athlete on the planet to openly decry the war was, at the time, blasphemous. When he declared his apathy toward the Viet Cong, public support of the Vietnam War was at its peak — in the first three months of 1966, the war’s approval rating was over 50 percent, according to Gallup. Ali, citing his faith and membership in the Nation of Islam, refused service and said he was a conscientious objector.

In a flash, Ali, already controversial for his conversion to Islam and name change from Cassius Clay, became one of the most hated public figures in the country. Nobody close to Ali’s level of fame had resisted the draft, and his seemingly flippant opposition to the war made him a target of ridicule from the public, the government and his sport. He’d spend the next four years battling for his beliefs in court instead of the ring, and after his 1967 arrest for draft dodging, all of his state boxing licenses were stripped. Ali’s boxing career was effectively over.


For a time, Ali continued to face public pressure to accept service. During his four years of court battles, he was [url=https://books.google.com/books?id=Kcvk1y7TP_4C&pg=PA56&lpg=PA56&dq=Ali+was+given+every+opportunity+to+recant,+to+apologize,+to+sign+up+on+some+cushy+USO+gig+boxing&source=bl&ots=SCZUG1pb3x&sig=wGv6jcsdwVnuPEfuxFC_uypX8Yc&hl=en&sa=X&ved=0ahUKEwjEl5zN8IzNAhWESSYKHcmRDwkQ6AEIHTAA#v=onepage&q=Ali was given every opportunity to recant%2C to apologize%2C to sign up on some cushy USO gig]given opportunities to recant, apologize and join the military[/url] in an entertainment capacity — to perform for the troops and cameras and show off his own signature persona. He declined, and some of his allies turned against him.The Nation of Islam, the same religious group that anointed him Muhammad Ali, disavowed him for his style of active resistance, according to Dave Zirin’s A People’s History Of Sports In The United States. Jackie Robinson, an athlete and activist himself during his playing years and beyond, ripped Ali for disappointing black war veterans, and by and large, black soldiers [url=https://books.google.com/books?id=GoeQeMBbSiAC&pg=PA293&lpg=PA293&dq=He%27s+hurting+the+morale+of+a+lot+of+young+negro+soldiers+over+in+Vietnam.&source=bl&ots=6WRydmgnwf&sig=tl98PRNLZqnqp3jM0a6XYWHSlgc&hl=en&sa=X&ved=0ahUKEwi07Kyg2YzNAhWCQyYKHYExBQAQ6AEIJTAC#v=onepage&q=He's hurting the morale of a lot of young negro soldiers over in]agreed with Robinson[/url]: Ali was being too radical.

“He’s hurting, I think, the morale of a lot of young Negro soldiers over in Vietnam,” Robinson said. “And the tragedy to me is, Cassius has made millions of dollars off of the American public, and now he’s not willing to show his appreciation to a country that’s giving him, in my view, a fantastic opportunity.”

But to Ali, that “fantastic opportunity” was a death sentence, and moreover, representative of the white aristocracy’s use of poor, often black Americans to fight the war for them.

Anyone who immediately came to Ali’s defense put themselves in danger. In A People’s History Of Sports In The United States, writer Jerry Izenberg recalled receiving bomb threats and tons of hate mail because he was willing to hear Ali out in the early days of his service refusal. But in most of the media, nastiness prevailed. Unlike Izenberg, famous sportswriters like Red Smith and Jim Murray were calling Ali a “punk” and “the white man’s burden.”..

I was not alive when this happened, but maybe Kenny or one of you can help.

From what I remember, those who DIDN'T go in (draft dodgers) were called cowards.  They got to live in peace, had girlfriends, partied, and most importantly, THEY LIVED!

Those who went in were called BABY KILLERS.  They were shot, captured, killed, maimed for life, became homeless, and the United States forgot about them.  How many POWs or MIAs are still unaccounted for?

Do I have it correct?  Someone please chime in.

As for Ali - I became a fan of Muhammad Ali NOT because of his boxing (I don't like the sport) but because he stood up for what he believed in.  Once I heard that statements in the video below as a young man, I understood that values are more important than what people consider "the right thing to do".

I'm sure most Americans were all for that war, based on a lie, and won't admit they were wrong for supporting it.

Here is that video that made me an Ali fan, I just located it:

He was too busy fighting for civil rights HERE, he knew he had NO BUSINESS going to Vietnam.

Similar topics
» Dr.. The appearance of Muhammad Salih *: A testimony of history on the issue of raising the value of the Iraqi dinar in the year 2006-2008, as revealed by Professor Muhammad Allawi in his last lecture in Washington **
» Electricity: technician opposed stop Nasiriyah station work
» Abadi coalition opposed to the withdrawal of foreign forces: We need to be careful
» France: International coalition opposed a cautious withdrawal from tenderness
»  Ministry of Oil: Any measure to increase oil production will not be monolithic

Page 1 of 1
Permissions in this forum:
You can reply to topics in this forum
Who is online?
In total there are 77 users online :: 1 Registered, 0 Hidden and 76 Guests :: 3 Bots