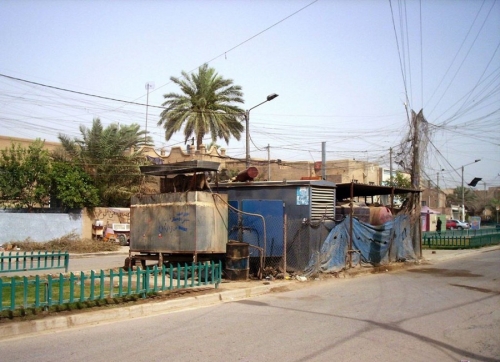 Taken province of Baghdad, on Saturday, strict legal action up to the death warrants generators in conflict with the legal instructions and controls owners.


[ltr] He said Baghdad Governor Ali Mohsen al-Tamimi said in a statement received by all of Iraq [where] a copy of it on Saturday, "the owners of generators in conflict with the regulations set by the Baghdad Provincial Council, regarding Alomiberat prices and times of operation, will take the right legal procedures up to the arrest, as opposed to the instructions and regulations of the Government of local Baghdad and Iraqi law. "

And "The province will open new windows to receive complaints from the public through modern means of communication and there will be immediate action."

He said Tamimi, according to the statement, "it was an emergency meeting held at City Hall to discuss the mechanism of action of the electric power generators operating hours and cutting the price Amp and to hold violators of the generator owners were also necessary portion of fuel for generators during the next two months to discuss."

He added that "the Baghdad province is determined to provide what is best for the citizens in terms of improving the electric energy in order to reach what the province seeks through coordination between the provincial council and the directorates of electricity and Alqaimmqamyat for the purpose of setting cut programmer to see the actual operating hours of the agenda, as well as visits of surprise to the owners of generators All areas, pointing to the importance of the cooperation of citizens and reporting stations which switches off the electricity to the end of each month of the application of legal proceedings against them as well as generators in conflict with the owners. "
He said Tamimi, "he will activate the role of the committees formed under the chairmanship of the administrative units of directors and the membership of the municipal council for the area and the police station and take legal action and moving the criminal complaint against violators of operators generators, without exception, and that link into custody and other legal measures to force them to comply with regulations and instructions province."[/ltr]

Similar topics
» Nineveh .. Revealed the cause of the coup in the Tigris River
» Security forces take strict security measures in Baghdad belt
» Reporters Without Borders (RSF) calls on the Iraqi authorities not to execute a warrant for the arrest of Suadad Al-Salhy, a Baghdad-based reporter for the Middle East Eye news website, and urges the judicial system to drop the charge brought against her.
» Strict measures to prevent the infiltration of al-Baghdadi to Daash
» 237 issuance of an arrest warrant against the ministers and managers in 2015