A state of emergency has reportedly been declared in Baghdad after supporters of the Shia cleric Moqtada al-Sadr stormed the Green Zone and entered the parliament building.
Hundreds of people gathered in protest at the failure of Iraqi MPs to convene for a vote to approve new ministers. The unrest comes after weeks of political turmoil in Baghdad over efforts by the prime minister, Haider al-Abadi, to replace party-affiliated ministers with technocrats. MPs failed to reach a quorum to approve the measures on Saturday.
People gathered outside the heavily fortified green zone, comprising government buildings and foreign embassies, after crossing a bridge over the Tigris river chanting: “The cowards ran away.”
They reportedly attached cables to the tops of concrete walls surrounding the green zone and pulled them down to gain access. Protesters are believed to have damaged cars belonging to MPs, and a video emerged online of a man in a grey suit being beaten.
Footage from inside the parliament building appears to show scores of people across both levels waving flags and chanting. “You are not staying here. This is your last day in the green zone,” shouted one protester, according to Agence France-Presse.
All entrances to Baghdad have been closed “as a precautionary measure to maintain the capital’s security”, a security official said. A UN spokesman and western diplomats inside the green zone said their compounds had been locked down.
The UN Assistance Mission for Iraq (Unami) , which has its headquarters in the Green Zone, said it was gravely concerned about the situation. In a statement it condemned any violence against elected officials and urged “calm, restraint and respect for Iraq’s constitutional institutions at this crucial juncture”.
It said the UN mission “continues to operate from its headquarters in Baghdad’s international zone and is in constant contact with parties to facilitate a solution that meets the demands of the people for reform.”
Iraq’s elite counter-terrorism forces had yet to be called on to reinforce security, and police and troops appeared to be taking no action against the protesters.
“We still view this as a demonstration,” said Sabah al-Numan, a spokesman for the counter-terrorism forces. “We aren’t taking any part in this as it’s not something regarding terrorism.”
He said that if the unrest escalated his forces may have to intervene to “protect the legitimacy of the government”. 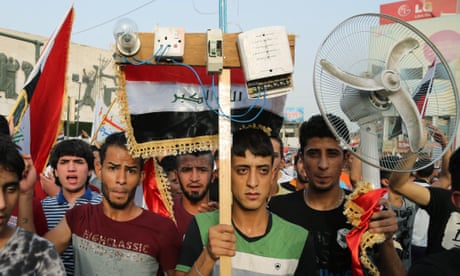 
The unrest began after Sadr held a news conference in the holy Shia city of Najaf and condemned the political deadlock. He threatened last month that his supporters would storm the green zone, but he did not order them to enter the area in his address on Saturday.
He said the politicians “refused to end corruption and refused to end quotas”, adding that he and his supporters would not participate in “any political process in which there are any type … of political party quotas”.
For years key government posts have been shared out based on political and sectarian quotas, which the demonstrators want to end. Abadi’s move to change the system has been opposed by powerful political parties that rely on control of ministries for patronage and funds.
Both Washington and the UN have said the political crisis could distract from the fight against Islamic State.
Also on Saturday, a bomb targeting Shia pilgrims near Baghdad killed at least 23 people. Isis later claimed responsibility for the attack.[/size]