Announced in 2012 --Three Currencies Ready for a HUGE Revaluation

Announced in 2012 --Three Currencies Ready for a HUGE Revaluation 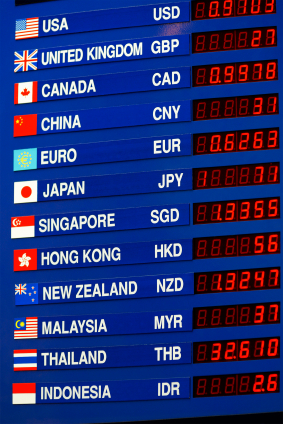 Both the U.S. dollar and euro are doomed.
Why? Because in addition to being in slow-growth economies, saddled with debilitating debts, they’re the victims of an enormous increase in money supply.
The obvious result is serious inflation and the devaluation of both currencies in the coming years.

Even if the United States doesn’t add to its already bloated debt, the interest on it – coupled with massive money printing – virtually guarantees higher prices.
Same goes for Europe, as the region is printing money out of thin air to bail out its ailing countries and banks.

However, the euro and dollar’s pain could easily be your gain.
You see, the situation is rapidly creating a new currency world order. Specifically, three currencies are poised for a massive upward revaluation…

The Three “Super Currencies” of Tomorrow

There’s a trio of currencies that you must include in your portfolio today.
Backed by solid fundamentals in countries that rely on growth, not artificial monetary stimulation, these three currencies operate on an entirely different playing field than the dollar and euro.

And they’re set to undergo huge revaluations in the coming months. Without further ado…

As the dollar and euro decline, the Chinese are busy plowing the yuan into assets that increase in value. Things like mines, factories, other currencies and natural resources.
At current levels, the yuan is a bargain. Of course, the Chinese government deliberately sets the exchange rate artificially low – rather than allowing it to float freely on world markets – in order to profit from Chinese goods and services.
With the world balking at this arrangement, the Chinese will have to revalue the yuan in a big way over the coming years. Why? Two reasons…

As a tandem, these two catalysts will force the value of the yuan higher in the years ahead.

Where to Invest: The FOREX market is fraught with volatility and requires a special account to execute trades. In lieu of that, take advantage through the WisdomTree Chinese Yuan ETF (NYSE: CYB). Hold for the long term – two to five years – and look for 20% upside against the U.S. dollar in five years.

Having dropped by more than 20% against the dollar over the past couple of years, the rupee is an absolute steal right now.

The Indian Central Bank controls the rupee closely. And in an effort to combat the financial crisis and make Indian goods and services more competitive, it’s allowed the currency to depreciate.

The result? An artificially weak rupee that will appreciate due to the trend in global growth and money flow.

With Indian GDP growth set to outstrip all Western economies in the years ahead, the country will have to raise interest rates to quell inflation.
In the past, this wasn’t an issue, since India wasn’t a global player when it came to importing goods and services. It was a closed, insulated economy, where the majority of the population bought locally.

But with the Indian middle class approaching some 400 million people, the country is beginning to import more goods. Such a reality will lead to inflation, which will force the central bank to tighten monetary policy.

Where to Invest: You can buy the Indian rupee through the WisdomTree Indian Rupee ETF (NYSE: ICN). Again, plan to hold for two to five years. I project 25% growth against the U.S. dollar in five years.

The Canadian dollar has a bright future. For starters, Canada is rich in natural resources like oil, timber and gold.

As the prospects for global growth pick up, all three are in huge demand from developed and developing economies alike – a trend that will remain for years.

Canada also has its fiscal house in good order. Its AAA credit rating is secure, as the country quickly tackled its debt issues in the early part of this century. As a result, the Canadian dollar has almost doubled against its U.S. counterpart in the past decade.
In addition, Canada didn’t have to bail out its banks or financial system because of lax lending practices. Quite the opposite, in fact. Thanks to their financial strength, Canadian banks are now expanding into the United States in record numbers.

In short, Canada has a lot going for it. It supplies emerging markets… it has a strong and fiscally responsible financial system and government… it will benefit from a U.S. economic recovery… and it maintains a transparent and trusted economy.

Where to Invest: Add the “loonie” to your portfolio through the CurrencyShares Canadian Dollar Trust (NYSE: FXC). Like the Chinese yuan and Indian rupee, this is a long-term holding, with a further 25% gain against the U.S. dollar in five years.

Bottom line: Remember that we’re talking currencies here, so a move of 10% to 15% would be huge. These three will represent the new world order in the currency market over the coming years – and the gains will reflect that.

The best way to buy the yuan, rupee and Canadian dollar is to make regular investments over time. Don’t pile in at once. Average your cost over the next few months as the U.S. economy strengthens. Such a strategy will allow you to buy the currencies at reasonable levels.
Good investing,
Karim Rahemtulla

Re: Announced in 2012 --Three Currencies Ready for a HUGE Revaluation

Well yes and no. Not in regards to the dinar, but a couple of the currencies mentioned. Both the China and India are struggling with economic issues right now that seem intractable. Especially China. In addition India is in a region that has shown a lot of instability for years, and has a lot of trouble with terrorism and dissidents inside their own country. There is at least some of that sort of thing in China as well, but with a society as closed and repressed as theirs it is hard to know how much. All of this makes me very cautious about both countries.
*****************
Trust but Verify --- R Reagan

Re: Announced in 2012 --Three Currencies Ready for a HUGE Revaluation

Bottom line: Remember that we’re talking currencies here, so a move of 10% to 15% would be huge. wrote: