BAGHDAD — Iraq needs $1.56 billion this year to finance its emergency response to the humanitarian crisis caused by the war against ISIS, according to a government report released on Sunday.
Baghdad, strapped for cash amid a plunge in oil prices and higher military expenditure associated with the fight against the Sunni jihadist group, will manage to fund less than 43 percent of those needs from its budget, the report said.
"The international community is necessary for bridging the deficit or financing gap," it added. 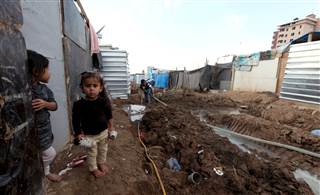 A displaced Iraqi child who fled from ISIS poses for a photograph at the refugee camp in Arbil, north of Baghdad, on Nov. 30, 2015. AZAD LASHKARI / Reuters

The conflict has displaced more than 3.3 million people since 2014. The Iraqi government allocated around $850 million last year for efforts to shelter such families and help them return to recaptured areas, but it ended up funding less than 60 percent of that, the report showed.
ISIS seized about a third of Iraq's territory in the north and west in 2014, but has slowly been pushed back by Iraqi forces, Iranian-backed Shi'ite militias and Kurdish peshmerga fighters — backed by U.S.-led coalition air strikes.
Most of the displaced people, living in makeshift camps, disused buildings and homes in Baghdad, the northern Kurdistan region and other areas, are from Iraq's Sunni minority.
*****************
Leadership is a potent combination of strategy and character. But if you must be without one, be without the strategy. - Norman Schwarzkopf, Jr.

Similar topics
» Mass Grave Found in Ramadi, Iraq, After ISIS Driven From City
» Canada pledges $358 million to Iraq for humanitarian crisis, economic reform
» U.S. ambassador: we supported Iraq with three billion dollars in humanitarian aid
» US Consul: We have provided more than $ 7 billion in humanitarian and economic assistance to Iraq
» VIDEO:This Is Mosul 18 Months After ISIS Was Driven Out (HBO)