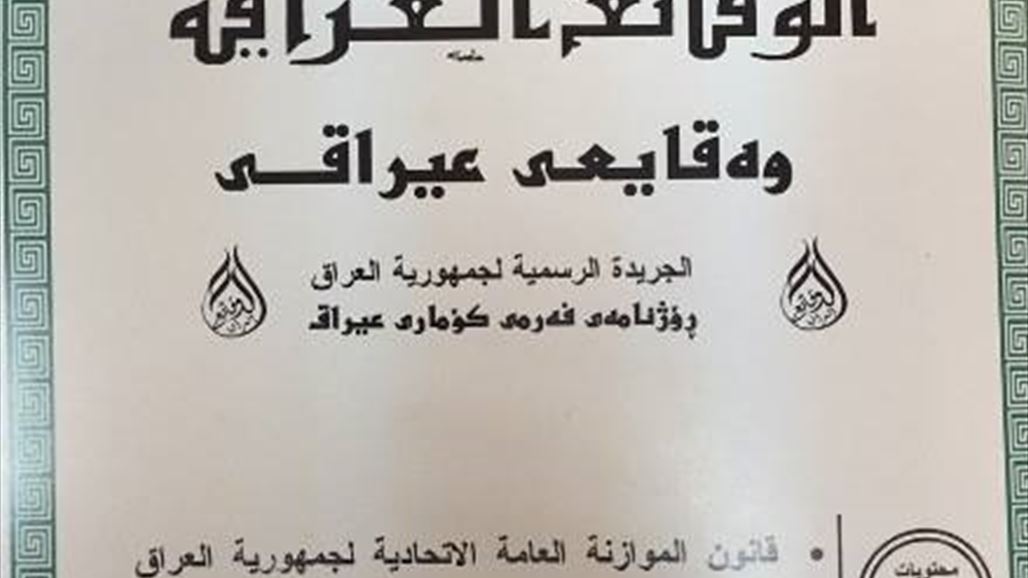 Alsumaria News / Baghdad
The Ministry of Justice, Thursday, for the issuance of the new issue of the Gazette of Iraq and ensure that the federal budget for the year 2016 law, pointing out that the budget estimated at more than 81 trillion dinars.

The general director of the Iraqi facts circle Muhannad Zebra in a statement issued by the Information Office of the Ministry of Justice and seen by Alsumaria News, "It was issued number (4394) of the Gazette of Iraq and ensure that the federal budget of the Republic of Iraq for fiscal year 2016," explaining that "the law was issued based on what passed by the House of Representatives in accordance with the provisions of the first item of Article 61 and Item III of Article 73 of the Constitution, and approved by the Presidency of the Republic. "


He Zebra, that "version ensures more accurate for this law detail where the budget estimated one and eighty trillion seven hundred billion Tmnmaip and three million and one hundred and thirty-eight thousand dinars," adding that "it was revenue from the export of crude oil is calculated based on the price rate of forty-five dollars per barrel and the rate of export of three million six hundred thousand barrels a day. "

The presidential spokesman Khaled Huani announced, in (January 2016 3), for President Fuad Masum approval of the federal budget for the current year law, among the president stressed the importance of adhering to adjust unnecessary expenses and provide basic services a few social segments of income.

And the voice of the House of Representatives, in (December 16, 2015), a majority of those present on the draft budget law for fiscal 2016 valued at more than 105 trillion dinars, and a deficit of more than 24 trillion dinars.

entered the federal budget of the Republic of Iraq for the fiscal year 2016 into effect and the exchange after its publication in the Gazette of Iraq budget law, on Thursday, and which was approved by the House of Representatives and endorsed by the Presidency of the Republic.

The newspaper published the budget law, pointing out that the budget amounted to 81.7 trillion dinars (72.03 billion dollars), a deficit of 24.19 trillion dinars (21.32 billion dollars), covering internal and external borrowing and the amounts of cash retained in the Ministry of Finance account.
The calculated revenues generated from the export of crude oil on the basis of a price of $ 45 a barrel average rate of export volume 3.6 million barrels per day, of which 250 thousand barrels of the Kurdistan region, and 300 thousand of the province of Kirkuk.
http://www.ara.shafaaq.com/51917
*****************
Tweet

Another 'obstacle' removed, NOW, for the rest of the story-