Since their reserves total approximately $80 billion, and t[url=http://www.cbi.iq/documents/key financial.xls]heir M2 money supply is shown at about 85 trillion dinar[/url], the math doesn’t show any millionaire creating revaluation on the horizon.  $80b divided by 85 trillion = approximately $.00094 which is slightly higher than the dinar’s current valuation of $.00086. 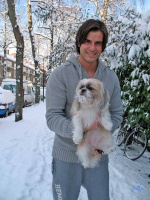 what if nothing  really happens except more bs from the usual actors. have no fear zim and dong still here.hee hee.