Commonly referred to as black cumin or caraway, black seed is actually more of a description than a proper name, yet is preferred because it helps to distinguish it. Many health experts claim that it is, indeed, a true healer in many forms; able to help cure almost every illness known. People have used the seed to make medicine for over 2000 years and more than 600 peer-reviewed studies have validated most empirical evidence.

Besides black cumin and caraway, black seeds are also referred to as black sesame, onion seed and roman coriander.

Black Seed (Nigella Sativa) is capable of producing over 20 distinct pharmacological actions it expresses, such as: 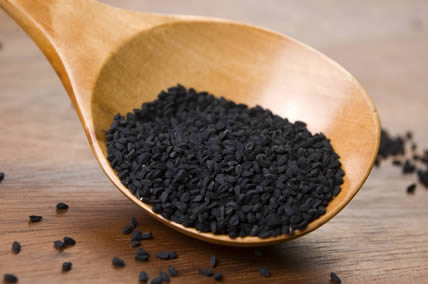 Croatian scientists evaluated the antitumor activity of thymoquinone and thymohydroquinone in mice and discovered that the two phytochemicals in black seed oil can resulted in 52% decrease in tumor cells!

Chronic administration of Nigella sativa changes pro and anti-inflammatory proteins. Also it may act as a balancing factor on lymphocytes.

Being rich in both chemicals, black seed is unique in that it can help prevent and treat cancer through a variety of mechanisms:

According to one study,

"The anti-tumor effects of thymoquinone have also been investigated in tumor xenograft mice models for colon, prostate, pancreatic and lung cancer. The combination of thymoquinone and conventional chemotherapeutic drugs could produce greater therapeutic effect as well as reduce the toxicity of the latter.")

The liver is one of the most important organs in the body. Nearly every toxin gets processed through the liver, and the bile from the liver is the key to digesting fats and keeping your mind and body happy and healthy. For those that have struggled with poor liver function due to medication side effects, alcohol consumption, or disease, black seed oil could greatly speed the healing process. In a recent study scientists discovered that black seed oil benefits the function of the liver and helps prevent both damage and disease.

Explained in a recent article published by the Journal of Endocrinology and Metabolism, researchers from the Indian Council of Medical Research highlight that black seed oil "causes gradual partial regeneration of pancreatic beta-cells, increases the lowered serum insulin concentrations and decreases the elevated serum glucose." This is actually quite profound because Nigella sativa is one of the few substances on the planet that is suggested to help prevent both type 1 and type 2 diabetes.

In fact, according to the study, black seed "improves glucose tolerance as efficiently as metformin; yet it has not shown significant adverse effects and has very low toxicity!" This is HUGE because metformin, one of the most commonly prescribed type 2 diabetes drugs, can cause a wide slew of side effects including:

The Journal of Diabetes and Metabolic Disorders published a study last June systemically reviewing the literature for plants that have anti-obesity properties and discovered that black seed oil was amongst the most effective natural remedies on the planet.

Not traditionally believed to treat obesity, Nigella sativa is a marvelous anti-inflammatory agent that is known to help people lose weight in the same way that it helps diabetics. Specifically, by decreasing these weight gain triggers, black seed oil has helped millions shed excess weight:

Probably one of the most unique black seed oil benefits is its uncanny ability to help restore hair loss. No one quite understands why it happens, but it’s not too hard to guess that it has something to do with its powerful antioxidant and antimicrobial properties. By strengthening hair follicles, there is very good reason to see how black seed oil can help promote strengthened hair roots.

Produced in the retina, choroid and epidermis, melanin are pigments that protect the skin from damage. You probably are most family with it being the main chemical responsible for giving our eyes and skin their individual color. Known to promote and inhibit melanogenesis (melanin production), black seed oil benefits on the skin and other cells are profoundly healing.

For example, in a recent study conducted by Iranian researchers, Nigella saliva was found as effective as the skin cream Betamethasone in improving quality of life and decreasing severity of hand eczema. When you consider that black seed oil has virtually no side effects, the benefits of Nigella, in fact, far exceed medical intervention!

Of all the superbugs that black seed oil can kill, Methicillin resistant Staphylococcus aureus (MRSA) is one of the most important. MRSA is plaguing hospitals and nursing homes across the globe because ordinary staph infections are becoming resistant to generic antibiotics. The elderly population is especially at risk because it is generally associated with invasive procedures such as surgeries, intravenous tubing, and artificial joints. Primarily due to weakened immunity, the growing population of senior citizens has made MRSA a global public health risk.

Thankfully, one of the strongest black seed oil benefits comes to the rescue. Pakistan scientists took several strains of MRSA and discovered that each one was sensitive to N. Sativa, proving that black seed oil can help slow down or stop MRSA from spreading out of control.

Purpleskyz, I was just reading different websites about Blackseed and Blackseed Oil last week.  Expensive product but well worth the cost if it does everything stated about it.

One thing that caught my eye was the side effects for metformin which is widely used for type 2 diabetes.  I read that heart failure is a leading cause of death in diabetics and the main reason is that metformin slowly thickens your blood until it gets to the point that your heart can't pump it, heart attack and death follows.

I had a first cousin with diabetes who died 2 years ago.  The week of his death, he had gone to the Dr. for a checkup and he voiced concerns of having a foot amputated.  The Dr. told him, you don't have to worry about that, you will die of a heart attack first.  3 days later...gone.  He was on metformin.

Big pharma creates customers. Doctors are in bed with big pharma. Simply put they do not always have the patients best interest at heart. No pun intended.

I am an advocate of cannabis oil. Pretty much cures, heals from the cellular level many many illnesses and diseases.

Thanks, I have to read up on cannabis oil.

I tell people all the time who are tied to their meds, continue taking what the Dr. gives you and each visit he will attempt to add another prescription.  He will eventually kill you and not give it a second thought.  Those are unnatural chemicals he is directing you to put in your body.

Right Purpleskyz about big pharma.  Doctors of years ago honored their Hippocratic oath.   It's more of a hypocritical one now.   Nowadays it is all about the money and most could not care less about their patients.   I feel about Drs. the way people have felt for years about auto mechanics.

Funny story, when I was 14 years old I had an appendectomy.  The next morning the doctor came in the room and asked my dad if they had had me up walking around.   My dad said, "no, he said it hurts when he tries to put his feet on the floor."   The doctor said, "I had one years ago and I was all over the hospital the next day."  My dad said, "you probably had a better doctor than he did."  The look on that doctors face was...priceless.

ahaha that is awesome!

I have a forum full of cannabis info, studies, testimonials, directions on how to make your own etc.
http://www.oom2.com/f1-cannabis-natures-medicinals

I also can help those that live in a non legal state to receive a CBD oil product that is medical grade. The results are amazing to say the least of those that we can help. COPD, cancer, bone spurs, arthritis, Lymes, Crones, and on and on. Almost total repair in most cases.
*****************
Out Of Mind
www.oom2.com

Thanks for that link!!

Similar topics
»  Speculation and ill-considered actions.. A Black fate awaits the Iraqi dinar
»  Backdoc says to ENJOY THE ACTIONS OF THE NEXT FEW DAYS MY FRIENDS, "ACTIONS MEAN THINGS"!
» A SEED FOR CONTEMPLATION
» Never Sell Your Seed..
» PEY Gets €300,000 in Seed Funding for Bitcoin Payroll Service