Ringling Bros. to Retire All Circus Elephants in May — 2 Years Early

Ringling Bros. to Retire All Circus Elephants in May — 2 Years Early

ST. PETERSBURG, Fla. — The Ringling Bros. and Barnum & Bailey Circus is ending its elephant acts a year and a half early, and will retire all of its touring elephants in May.
The move comes amid increasing scrutiny on circus elephant acts with local governments passing "anti-circus" and "anti-elephant" ordinances in response to concerns over animal cruelty.


The circus's parent company, Feld Entertainment, told The Associated Press exclusively that all of the iconic elephants will be permanently retired to the company's 200-acre Center for Elephant Conservation in central Florida. There are currently 11 elephants on tour with the circus. 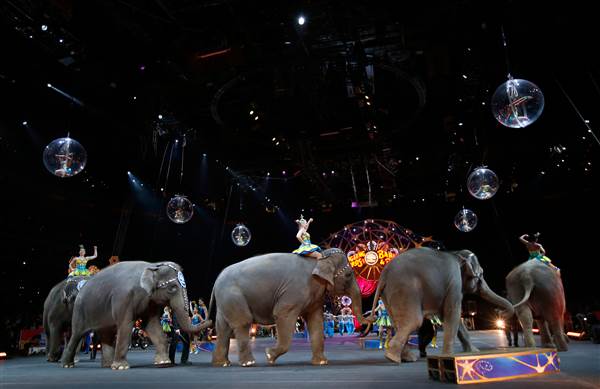 Elephants walk during a performance of the Ringling Bros. and Barnum & Bailey Circus, in Washington, D.C., on March 19, 2015. Alex Brandon / AP File

"They'll be joining the rest of the herd," said Alana Feld, Ringling's executive vice president and show producer, who is also part of the family that owns Feld
Entertainment. Feld owns the largest herd of Asian elephants in North America. In addition to those still touring, there are 29 elephants on the property now, and two additional animals are on breeding loans to zoos, Feld said.

It costs about $65,000 yearly to care for each elephant, she said, and the company had to build new structures to house the retiring elephants at the center, located between Orlando and Tampa.

Last year, Feld Entertainment announced that the elephants would be phased out and eventually retired by 2018. Once the company began planning, it realized it could retire the elephants a lot sooner, Feld said.

Elephant acts have been showcased by Ringling for more than a century and have often been featured on its posters.

But because so many cities and counties have passed "anti-circus" and "anti-elephant" ordinances, it became difficult to organize tours of three traveling circuses to 115 cities each year, Feld Entertainment CEO Kenneth Feld said last year. Fighting legislation in each jurisdiction is expensive, he said.

Los Angeles and Oakland prohibited the use of bull-hooks by elephant trainers and handlers last April. The city of Asheville, North Carolina, also nixed wild or exotic animals from performing in the municipally owned, 7,600-seat U.S. Cellular Center.

Ringling's new show will begin in July without the giant pachyderms.

"We're looking at a lot of new ways of doing things," Feld said.

She said the retired elephants at the CEC will also be part of cancer research.


Cancer is much less common in elephants than in humans, even though the big animals' bodies have many more cells. That's a paradox known among scientists, and now researchers think they may have an explanation — one they say might someday lead to new ways to protect people from cancer.

Compared with just one copy in humans, elephants' cells contain 20 copies of a major cancer-suppressing gene, two teams of scientists reported in October. The gene helps damaged cells repair themselves or self-destruct when exposed to cancer-causing substances.

The findings aren't proof that those extra p53 genes make elephants cancer-resistant, but if future research confirms it, scientists could try to develop drugs for humans that would mimic the effect.

Dr. Joshua Schiffman, a pediatric cancer specialist at the University of Utah, is one of the researchers trying to find clues in the blood samples of some of the Ringling elephants.

"There's so much to be learned from their DNA," Feld said.

Animal rights activists have long alleged that circuses have mistreated elephants.
In 2014, Feld Entertainment won $25.2 million in settlements from a number of animal-rights groups, including the Humane Society of the United States, ending a 14-year legal battle over allegations that Ringling circus employees mistreated elephants.

Last year in March, Feld Entertainment announced that the performances would be phased out by 2018. But the process has moved along more quickly.

"The company’s dedicated staff has made the necessary plans and preparations to move the elephants to the Center for Elephant Conservation much sooner than anticipated," the center said in a statement.

According to Alana Feld, Ringling's executive vice president and show producer, it costs about $65,000 annually to take care of each elephant, the AP reported.

PETA President Ingrid Newkirk responded to the news on January 11, saying that the group is calling on the circus to end all animal acts.

" PETA warns that because the circus has refused to retire these elephants to an accredited sanctuary, vigilance will be needed to determine how they are treated," Newkirk said in a statement.

Kenneth Feld, Chairman and CEO of Feld Entertainment, called the decision to retire the elephants "the most significant change we have made since we founded the Ringling Bros. Center for Elephant Conservation in 1995."

When we did so, we knew we would play a critical role in saving the endangered Asian elephants for future generations, given how few Asian elephants are left in the wild. ...This decision was not easy, but it is in the best interest of our company, our elephants and our customers," Feld said in a statement in March 2015.

This is a shame, as elephants have been a hallmark for the circuses for decades, but on the other hand, it is very costly to house ,feed, train, and administer medicine when and if they need it, and a lot of these elephants have a lot of years on them, so I think it is time for them to retire, and live out the rest of their lives in comfort- I have gone to the Barnum and Bailey's circuses for years, and will miss the elephants, and my heart goes out to them-Some MAY end up at the Sanford, Florida Zoo, and hope to see them in the spring-The Zoo is 38 miles from my location, here, in Central Florida-

yes, Terbs what a great act it is? Let's hope an elephant wins in 2016 presidential election. I'm real tired of the jackasses in Washington...Oh wait, there are plenty of jackasses who claim to be republicans.
*****************
EVEN CRAZIES LOVE INDEPENDENCE DAY

WPSMIT, you are correct on both counts- I remember when my Father got me a huge 'Jumbo' elephant at the circus, in Bangor, Maine, back in 1958, and it was so big, with the stuffed elephant sitting upright, I could sit in it's lap! What memories!