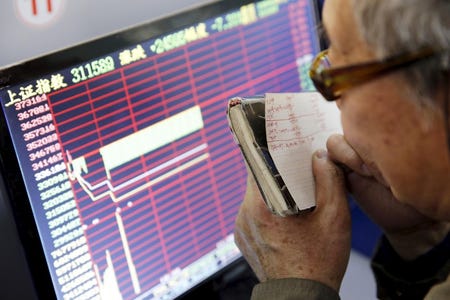 
SHANGHAI (Reuters) - Chinese markets face a day of high drama as share trading resumes with no automatic mechanism in place to restrict selling and the world watches to see if Beijing will allow its currency to fall yet further.

Authorities surprised late Thursday by abandoning a new circuit-breaking mechanism for halting trade in overly volatile markets after stocks sank more than 7 percent for a second day this week.

The People's Bank of China (PBoC) also wrong-footed traders by reportedly intervening heavily to defend the yuan in offshore trade, reversing a decline of more than 1 percent that took it to a record low of 6.7600 per dollar.

The action was somewhat ironic since it was the PBoC that triggered the slide early Thursday by fixing the yuan at a much lower rate than many expected .

That left dealers at a loss to know what the central bank might do at Friday's fixing.
"The sharp drop has led to speculation that China is letting go of the reins on the CNY (yuan), or perhaps targeting faster depreciation to reach an 'equilibrium' level," wrote analysts at Barclays, while conceding that no one was really sure.

They were still hopeful, however, that the authorities were not yet outmatched.
"We do not think that China will let the move get out of control and would prevent a sharper move or any panic in global markets," argued Barclays.

Equally, dealers are uncertain how Chinese equity investors will react to the abolition of the circuit breaker.

The mechanism itself was in large part to blame for the panic selling seen this week as investors rushed to dump positions before it was triggered.

Page 1 of 1
Permissions in this forum:
You can reply to topics in this forum
Who is online?
In total there are 73 users online :: 0 Registered, 0 Hidden and 73 Guests :: 3 Bots