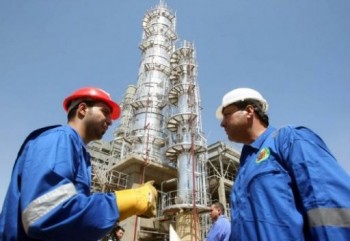 He added that "the price of a barrel of oil last year's rate of $ 44 and 748 cents," adding that "Iraq exported 99 million and 658 thousand and 761 barrels of crude oil during the month of December last, a decline in exports for the month of November."

He continued that "the revenue generated amounted to two billion and 973 million and 308 thousand dollars," noting that "the average daily oil exports amounted to three million barrels and 215, with an average sale price per barrel was $ 29 and 835 cents."

He said ministry spokesman Assem Jihad said in a statement seen by Twilight News, that "the total oil exports to Iraq last month (December) amounted to 99 million and 658 thousand and 761 barrels," noting that "the daily average for export stood at three million and 215 barrels."

Jihad said, "The revenue generated amounted to approximately two billion and 973 million and 308 thousand dollars at a price of $ 29 and 835 cents per barrel," explaining that "exports from southern Iraq amounted to 99 million and 658 thousand and 761 barrels, either from Ceyhan are parked as a result of non-delivery of the agreed quantities by the Kurdistan Regional Government. "

Spokesman also said the ministry that "total oil exports for 2015 amounted to one billion and 96 million and 778 thousand and 863 barrels at a rate of exporting a daily average of three million and five barrels a total revenue of 49 billion and 79 million and 199 thousand and 297 and $ 15," noting that "the price of a barrel reached 44 dollars and 748 cents last year. "

It costs the Iraqi government less than 2.00 of labor and material to get a barrel of oil from the ground and fill the barrel.  The barrels they use for oil are 42 gallons, not 55 gallons that most believe.  Seems like they are making money or will make money not matter the price of oil. Hardly enough oil money to compensate a RI/RV.