Planning: high rates of poverty in Iraq and the unemployment rate exceeded 22%

Planning: high rates of poverty in Iraq and the unemployment rate exceeded 22% 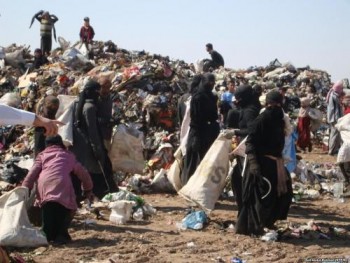 Confirmed the Iraqi Ministry of Planning, said on Sunday that poverty rates in Iraq have risen significantly, as pointed out that the unemployment rate exceeded 22 percent.

A spokesman for the Ministry of Planning and Development Cooperation Abdul-Zahra al-Hindawi said in a press interview, that "the unemployment rate rose in a clear and exceeded poverty rates of 22 percent, after it was dropped in 2013 to 19 percent."

Hindawi said that "the safety distance between us and the abyss is still good, and can change the economic track current and future treatments that can be resorted to, away from the harassment and political differences that Iraq has thrown many important opportunities."

And saw that "there is an opportunity in front of us, but to obtain loans to ensure the continued development wheel rotation," pointing out that "internal loans to be considered less burdensome on the economy, even if the economic impact is less than that of Foreign Affairs, because it is a transfer of purchasing power from the citizen to the government."

Hindawi suggested that "the government go about this kind of borrowing through the development of a private bank internal borrowing, and be the mechanism of action by depositing their savings from money citizens or jewels in the bank in return for attractive interest up to 12 percent, to encourage demand for lending."

He explained that "Such a mechanism rumor Deposit culture among banks, as there is a large monetary bloc may reach 30 trillion dinars deposited in the coffers of families, which could expose the theft or combustion, and this is the result of a lack of confidence of citizens or uttered sector of the Iraqi banking."

Similar topics
» Planning expects high poverty rate to more than 30%
» Planning: the unemployment rate in Iraq is 13.8%
» Minister of Planning: Corona and the financial crisis have caused an increase in poverty rates in Iraq to more than 31 percent
» An economic specialist to / Nina /: The high rate of poverty in Iraq to 52% is frightening and dangerous
» The high rate of poverty in Iraq, despite the enormous budgets is the inevitable result of the rampant corruption in state institutions

Page 1 of 1
Permissions in this forum:
You cannot reply to topics in this forum
Who is online?
In total there are 122 users online :: 1 Registered, 0 Hidden and 121 Guests :: 3 Bots