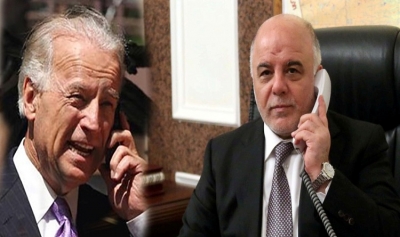 Joe Biden Vice President Barack Obama said on Wednesday his country's keenness on Iraq's sovereignty and its territorial integrity.
A statement by the prime minister received by all of Iraq [where] a copy of the Prime Minister Haider al-Abadi received a phone call from US Vice President, During the call confirmation on Iraq's sovereignty and territorial integrity and to discuss the strengthening of bilateral relations between the two countries in various fields and victories achieved on Daash terrorist gangs and the situation of political and security in Iraq and the region.

"said Biden, according to the statement" deeply his country's keenness on Iraq's sovereignty and that the United States of America with Iraq in maintaining its sovereignty and territorial integrity, as well as continued support for Iraq in all fields, especially the war on Daash Alarhabiyh.anthy gangs
LINK
*****************
Tweet

Re: Urgent Biden stresses Ebadi call for America's keenness on the unity and sovereignty of Iraq

BAGHDAD / Baghdadi News / .. revealed the parliamentary finance committee, on Wednesday, the allocation trillion and 800 billion dinars from the budget for the displaced.

The head of the Finance Committee Faleh effect at a news conference attended / Baghdadi News /, that he "has been allocated trillion and 800 billion dinars from the budget for the displaced," noting that he "will be delivered to the displaced monthly grant distributed by the smart card."

He said in effect that he "has the redeployment of the Ministry of Trade allocations Altamoanh of the card, so that the Ministry is then distributed to displaced families in hot spots."

For his part, member of the Committee said Haitham al-Jubouri, that "if the province issued more than 550 000 barrels of oil, the money that will be provided will go to the treasury of the central government," explaining that "the commitment of all the region Maalih of oil and duties."