The employees shut inside coffins--

The employees shut inside coffins--

South Korea has one of the highest suicide rates in the world, and workers often report feeling stressed. So in order to make people appreciate life, some companies are making employees take part in their own pretend funerals.

In a large room in a nondescript modern office block in Seoul, staff from a recruitment company are staging their own funerals. Dressed in white robes, they sit at desks and write final letters to their loved ones. Tearful sniffling becomes open weeping, barely stifled by the copious use of tissues.

And then, the climax: they rise and stand over the wooden coffins laid out beside them. They pause, get in and lie down. They each hug a picture of themselves, draped in black ribbon.


As they look up, the boxes are banged shut by a man dressed in black with a tall hat. He represents the Angel of Death. Enclosed in darkness, the employees reflect on the meaning of life.

The macabre ritual is a bonding exercise designed to teach them to value life. Before they get into the casket, they are shown videos of people in adversity - a cancer sufferer making the most of her final days, someone born without all her limbs who learned to swim.

All this is designed to help people come to terms with their own problems, which must be accepted as part of life, says Jeong Yong-mun who runs the Hyowon Healing Centre - his previous job was with a funeral company.

The participants at this session were sent by their employer, human resources firm Staffs. "Our company has always encouraged employees to change their old ways of thinking, but it was hard to bring about any real difference," says its president, Park Chun-woong. "I thought going inside a coffin would be such a shocking experience it would completely reset their minds for a completely fresh start in their attitudes." 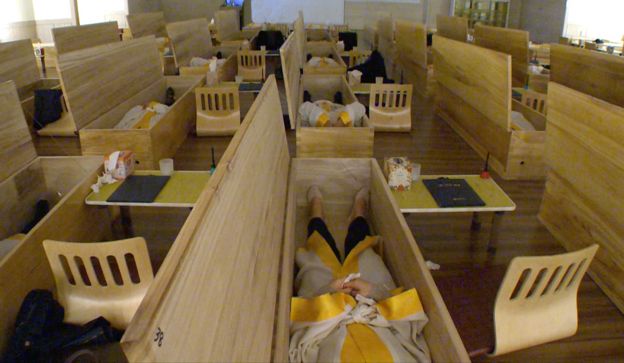 It's hard to know what the employees make of it - South Korea is a very paternalistic society and they are unlikely to criticise company policy but it seems to have an impact.
"After the coffin experience, I realised I should try to live a new style of life," says Cho Yong-tae as he emerges from the casket. "I've realised I've made lots of mistakes. I hope to be more passionate in all the work I do and spend more time with my family."
As the company's president, Park Chun-woong believes an employer's responsibility extends beyond the office. For example, he sends flowers to the parents of his employees simply to thank them for bringing his workers up.

He also insists that his staff engage in another ritual every morning when they get to work - they must do stretching exercises together culminating in loud, joint outbursts of forced laughter. They bray uproariously, like laughing asses together. It is odd to see.
"At first, laughing together felt really awkward and I wondered what good it could do," says one woman. "But once you start laughing, you can't help but look at the faces of your colleagues around you and you end up laughing together.

"I think it really does have a positive influence. There's so little to laugh about in a normal office atmosphere, I think this kind of laughter helps." 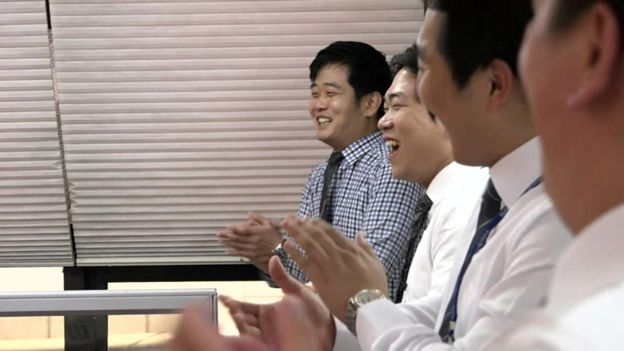 Certainly, some laughter is needed in the South Korean workplace. The country has the highest rate of suicide in the industrialised world. There is a constant complaint of "presenteeism" - having to get to the office before the boss and stay until he - invariably he - has gone.

The Korean Neuropsychiatric Association found that a quarter of those it questioned suffered from high stress levels, with problems at work cited as a prime cause.
Last year, the Seoul city government tried to alter the work culture by instituting a siesta, allowing employees to nap for an hour during the day - although there was a sting in the tail and they had to get to work an hour earlier or leave an hour later to compensate.

This idea hasn't caught on elsewhere. Competition starts early in life and and it's hard for adults to switch off the competitive urge that they developed as children. 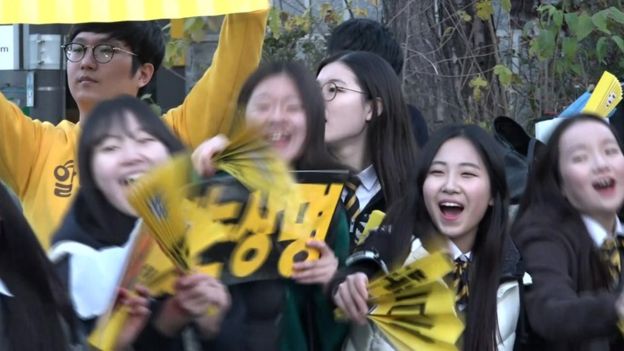 Last week saw one of the most bizarre displays of South Korea's competitive nature. More than 630,000 students in their late teens simultaneously took an exam to determine whether they go to a top university, a less prestigious one or no university at all. As they arrived at the test at 08:00, they were greeted by cheering schoolmates and an amazing hoopla of hugs.

Some adults started work an hour later than usual so there would be no morning rush hour to hold up candidates. Any student who was delayed could call a helpline and police motorbikes would come to carry them in. Flights were halted for 35 minutes in the afternoon during the aural section of the English exam. 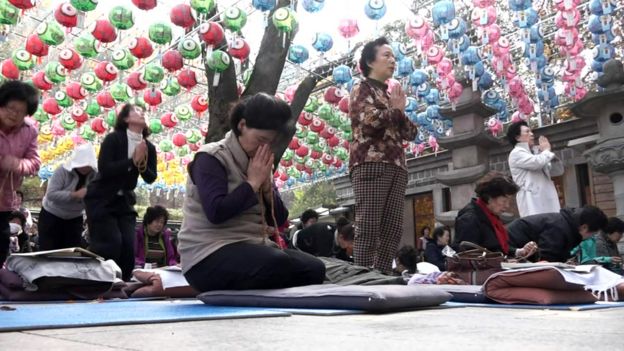 n Seoul, parents of candidates climbed to a Buddhist temple on a mountain to pray for success. Every day for 12 weeks, mothers and grandmothers had stood, knelt and bowed repeatedly in a ritual of prayer. Above them hung lanterns with the names of the object of those prayers - the pupils sitting the test.

With that kind of pressure to get the grades that lead to good jobs, it's no wonder stress is high in South Korea.

It may take more than pretend funerals to make pressurised workers relish the good things of life. And forced laughter is not real, joyous laughter. It is laughter which is forced!

Page 1 of 1
Permissions in this forum:
You cannot reply to topics in this forum
Who is online?
In total there are 205 users online :: 2 Registered, 0 Hidden and 203 Guests :: 3 Bots