North Korean ghost boats, in deadly hunt for fish, wash up in Japan

Fishing boats carrying decomposed corpses have washed ashore in Japan in recent weeks, leading to speculation they are rickety North Korean vessels that have strayed dangerously far from port under the impoverished nation's push to boost its catch.

There has been no mention from secretive North Korea of any missing boats, but its leader, Kim Jong Un, has put a high priority on fishing as a way of earning foreign currency and providing a sustainable food source that is not reliant on harvests and weather. 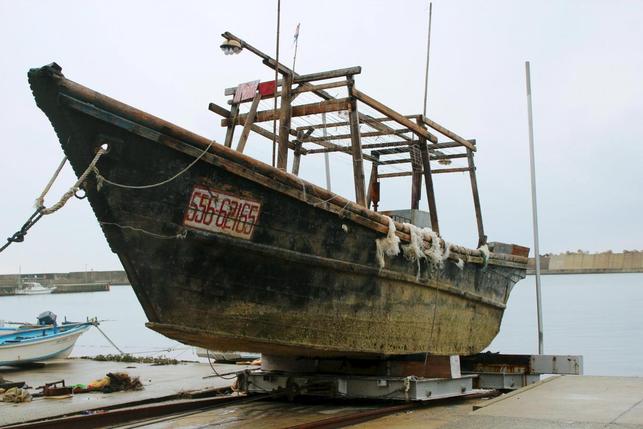 The Japanese coast guard and police reported 12 incidents of wrecked wooden boats, including some that were in pieces, on the country's shores and waters since October, containing 22 dead bodies, including five skulls.

Japanese authorities declined to comment on the origins of the boats or the possible identities of the dead, but a hand-written sign identified one boat as belonging to unit 325 of the North Korean army, according to footage from Japan's NHK Television. Tattered cloth was found aboard the vessel that appeared to come from the North Korean flag, the video showed.

Defectors and experts say fishing boats under the command of the Korean People's Army may have succumbed under pressure from Kim to catch more fish, drifting off course and ill-equipped for rough seas.

TV images of some of the boats showed relatively large but otherwise primitive-looking motorized craft and the coast guard said they did not have GPS navigation systems. Those aboard could have died of starvation and exposure to the cold after getting lost.

Although Japan's Meteorological Agency said there was not unusually bad weather in the Sea of Japan this November, the waters are rougher at this time of year due to the onset of cold, northwesterly winds.

October through February is also prime season for squid, sandfish and king crab off the east coast of the Korean peninsula, and it is not unusual that there would be high numbers of boats at sea, said Kim Do-hoon, a professor of fisheries science at Bukyong National University in Busan.

"Kim Jong Un has been promoting the fisheries, which could explain why there are more fishing boats going out," he said.

Over the years, North Korean boats seeking the rich fishing grounds of the Sea of Japan have washed ashore in Japan as well as on the deserted beaches of the Russian Far East. North Koreans looking to defect, on the other hand, typically flee by land into China, or, less often, via coastal waters to neighboring South Korea.

Fishing is a vital industry in a country where millions cannot find enough to eat. North Korea's 1.2 million-strong army is heavily engaged in food production, including fishing.

"Some of the boats belong to Korean People's Army fishery stations, possibly operating to catch sailfin sandfish," said An Chan-il, who served in the North's army as a junior officer before defecting to South Korea in 1979 and now heads a private think tank on North Korea in Seoul.

"Kim Jong Un is pushing hard to produce more fish. So these boats must have been stranded after overworking," he said.

Kim, North Korea's young leader, has made boosting food production a priority for the isolated country since taking office after his father died in late 2011, and recently visited a KPA fishing station on North Korea's east coast, calling for the facility to be upgraded, the official KCNA news agency said.

"Modernization of the station will help it catch more fish, (Kim) said, adding: The station should be turned into an up-to-date fishery base which can be boasted of in the world, thus making our ongoing efforts produce good results for the service persons and civilians," the Nov 25 report said.

Lee So-yeon, a North Korean army defector who arrived in Seoul in 2008, said fish products are a key export for North Korea's army, which hires civilian fishermen to make money.

"North Korean army units and security agencies are running many businesses to earn foreign currency from mining gold to catching fish on the west and east coasts," said Lee.

Lee Jong-won, professor of international relations at Japan's Waseda University, added: "The North is introducing an incentive system for producers. Fish is one of the main export products to China, which can be a way to get foreign currency…There is a possibility this incentive system led people to take more risks."