What Will It Mean If the Yuan Gets Reserve-Currency Status?

What Will It Mean If the Yuan Gets Reserve-Currency Status?

International Monetary Fund representatives have given China strong signals that the yuan is likely to soon join the fund’s basket of reserve currencies, known as Special Drawing Rights, Chinese officials with knowledge of the matter told Bloomberg News this week. Here’s a primer on what that means.

What is a Special Drawing Right?

The fund created the SDR in 1969 to boost global liquidity as the Bretton Woods system of fixed exchange rates unraveled. While the SDR is not technically a currency, it gives IMF member countries who hold it the right to obtain any of the currencies in the basket -- currently the dollar, euro, yen and pound -- to meet balance-of-payments needs. So the ability to convert SDRs into yuan on demand is crucial. Its value is currently based on weighted rates for the four currencies. 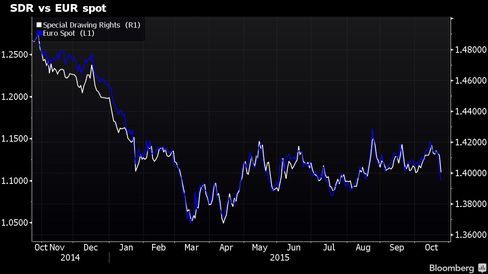 How much of these SDRs are out there?

The equivalent of about $280 billion in SDRs were created and allocated to IMF members as of September, compared with about $11.3 trillion in global reserve assets. The U.S. reported about $50 billion in SDR holdings as of August.

Why does China want this status so badly?

In a 2009 speech, People’s Bank of China Governor Zhou Xiaochuan said the global financial crisis underscored the risks of a global monetary system that relies on national reserve currencies. While not mentioning the yuan by name, Zhou argued that the SDR should take on the role of a “super-sovereign reserve currency,” with its basket expanded to include currencies of all major economies.
Chinese officials have since been more explicit. After meeting President Barack Obama last month at the White House, President Xi Jinping thanked the U.S. for its conditional support for the yuan joining the SDR. Winning the IMF’s endorsement would allow reformers within the Chinese government to argue that the country’s shift toward a more market-based economy is bearing fruit.

Why is the IMF likely to approve this?

Global use of the yuan has surged since the IMF rejected SDR inclusion in the last review in 2010. By one measure, the currency became the fourth most-used in global payments with a 2.79 percent share in August, surpassing the yen, according to the Society for Worldwide Interbank Financial Telecommunication, known as Swift.
The IMF uses several indicators to determine if a currency is “freely usable,” the benchmark for inclusion in the SDR basket. IMF staff members said in a report in August that the yuan trails its global counterparts in major benchmarks, such as its use in official reserves, debt holdings and currency trading. But staffers have also stressed that the fund’s 24 executive directors, who will make the final call, will need to use their judgment.
Many major economies, including the U.S., Germany and U.K., say they’re prepared to back the yuan’s inclusion if it meets the IMF criteria. Supporting the yuan may boost relations between China and countries such as the U.K., which has sought to make London a major yuan trading hub.

Adding the yuan to the basket may also help the IMF improve its standing with the Chinese. China and other emerging markets were supposed to gain greater representation at the fund under reforms agreed to in 2010, but the U.S. Congress has yet to ratify the changes.

What’s likely to happen to yuan assets in the longer term?

At least $1 trillion of global reserves will migrate to Chinese assets if the yuan joins the IMF’s reserve basket, according to Standard Chartered Plc and AXA Investment Managers.

Foreign companies’ issuance of yuan-denominated securities in China, known as panda bonds, could exceed $50 billion in the next five years, according to the World Bank’s International Finance Corp.

“Once the Chinese yuan becomes part of the SDR, central-bank reserve managers and institutional investors will automatically want to accumulate yuan-denominated assets,” Hua Jingdong, vice president and treasurer at IFC, said in an interview in Lima earlier this month during the IMF and World Bank annual meetings. “It will be strategically important for China to welcome all kinds of issuers to become regular issuers in China’s onshore market.”

Re: What Will It Mean If the Yuan Gets Reserve-Currency Status?

HONG KONG — The International Monetary Fund on Monday approved the Chinese renminbi as one of the world’s main central bank reserve currencies, a major acknowledgement of the country’s rising financial and economic heft.

TD Ameritrade: Trade Now
The I.M.F. decision will help pave the way for broader use of the renminbi in trade and finance, securing China’s standing as a global economic power. But it also introduces new uncertainty into China’s economy and financial system, as the country was forced to relax many currency controls to meet the I.M.F. requirements.
The changes could inject volatility into the Chinese economy, since large flows of money surge into the country and recede based on its prospects. This could make it difficult for China to maintain its record of strong, steady growth, especially at at a time when it economy is already slowing.
The I.M.F. will start including the renminbi in the fund’s unit of accounting, the so-called special drawing rights, at the end of September. Many central banks follow this benchmark in building their reserves, so countries could start holding more renminbi as a result. China will also gain more influence in international bailouts denominated in the fund’s accounting unit, like Greece’s debt deal.

China’s leadership has made it a priority to join this group of currencies, naming it in October as one of their highest economic policy priorities in the coming years. The renminbi’s new status “will improve the international monetary system and safeguard global financial stability,” President Xi Jinping of China said in mid November.
In the months before the I.M.F. decision, China took several actions to make sure that the renminbi was more widely embraced. China did so partly to meet the I.M.F.’s rule that a currency must be “freely usable” before it can be included in this benchmark.

China and Britain have sold renminbi-denominated sovereign bonds for the first time in London, which has emerged as Europe’s hub for the currency. Even Hungary has announced plans to issue its own renminbi-denominated bonds as well, while the Ceinex exchange in Frankfurt has begun trading funds this month based on renminbi bonds. Preparations began to trade renminbi-denominated oil contracts in Shanghai, where copper and aluminum contracts are already sold.
Most important, China began changing the way it sets the value of the renminbi each morning. In doing so, it abruptly devalued the currency.
The entry itself into the special drawing right is mainly symbolic. But such broader moves toward greater financial transparency and easier trading — part of the process to meet the I.M.F. requirements — will have long term effects on the renminbi’s usage.
“There’s this obsession with the S.D.R., and it’s completely out of proportion to its economic impact, which is likely to be trivial,” said Randall Kroszner, a former Federal Reserve Board governor who is now an economics professor at the University of Chicago. “It may be that in the drive to get into the S.D.R., they may make changes that make the renminbi more attractive for international market participants.”

Re: What Will It Mean If the Yuan Gets Reserve-Currency Status?

Page 1 of 1
Permissions in this forum:
You can reply to topics in this forum
Who is online?
In total there are 65 users online :: 0 Registered, 0 Hidden and 65 Guests :: 2 Bots