Egypt has launched its own inquiry into whether a bomb may have been placed on the Russian airliner that crashed in Sinai, killing all 224 people on board.
A senior Egyptian official - who asked not to be named - told the BBC that every lead was now being followed up. 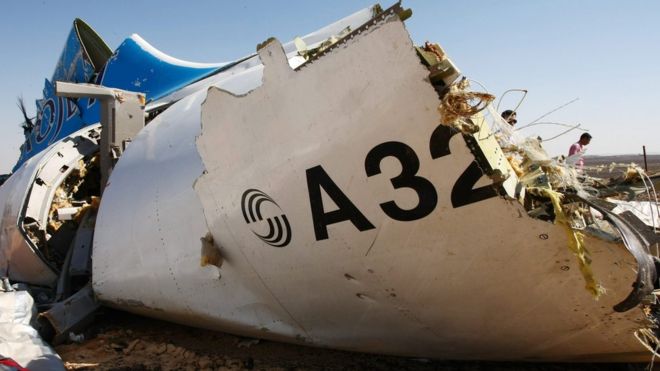 However, Egypt stresses that the official investigation into the crash of the Airbus 321 is not yet finished.

Some Western experts have suggested militants in the Sinai peninsula could have bombed the plane on 31 October.

Sinai Province, a group affiliated to Islamic State has repeatedly claimed it brought down Metrojet Flight 9268, flying from the Egyptian Red Sea resort of Sharm el-Sheikh to the Russian city of St Petersburg.

Russia - who initially criticised London's move - later announced it was stopping all flights to Egypt and flying some 80,000 Russian holidaymakers back home. Most of the victims on board the Metrojet airliner were Russian nationals.

It was either a ground to air heat seeking missle, or a bomb-Take your pick- Doesn't matter either way, now, because all the people are dead-Possibly a 'false flag' event to divert attention from what is really happening overseas, and here in the U.S.S.A-