The bond market is flashing a warning…Interest Rates Haven’t Been This Low Since 3,000 B.C.

The bond market is flashing a warning…Interest Rates Haven’t Been This Low Since 3,000 B.C.


The bond market is flashing a warning…

Right now, a widening “spread” in the bond market is pointing to trouble in the economy…

Since July, yields on “investment grade” bonds have been rising…while yields on Treasury bonds issued by the U.S. government have been falling.

Investment-grade bonds are issued by companies in a strong financial position. Typically, when the economy is strong and investors are confident that these companies will repay loans, yields on investment-grade bonds move in the same direction as Treasury yields. Treasuries are widely thought of as a safe haven because they’re backed by the U.S. government’s ability to tax 320 million Americans.

But as you can see below, investment-grade yields are rising, while Treasury yields are falling. We call this a “widening spread.” 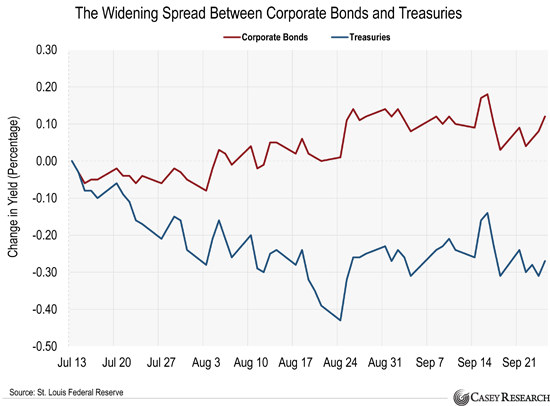 You won’t hear talking heads on CNBC mention it, but professional investors look at this spread almost every day. It’s that important. And the spread is on track to widen for the second year in a row…for the first time since the last financial crisis in 2007 and 2008.

The Wall Street Journal explains why this a bad sign.

Wider spreads mean that investors want more yield relative to Treasurys to own bonds from U.S. companies. It can signal that investors are less confident about companies’ business prospects and financial health, though other factors likely also are at play…

That would be the first time since the financial crisis in 2007 and 2008 that spreads widened in two consecutive years. The previous times were in 1997 and 1998, as a financial crisis roiled Asian countries, and a few years before the dot-com bubble burst…

•  There are other troubling signs coming out of the bond market…


On Sunday, Bloomberg Business said the spread between “junk bonds” and Treasuries is at its widest level since 2012.

Junk bonds are risky bonds that pay high yields. Companies that issue junk bonds are generally in poor financial condition…which is why they have to pay more to borrow money.

The effects of an economic slowdown will generally show up in these companies before they show up in more stable companies. So trouble in junk bonds can serve as an early warning for the rest of the economy.

Below you’ll see the price chart for the iShares iBoxx $ High Yield Corporate Bond ETF (HYG), the junk bond ETF. HYG is down 6% in the past month. 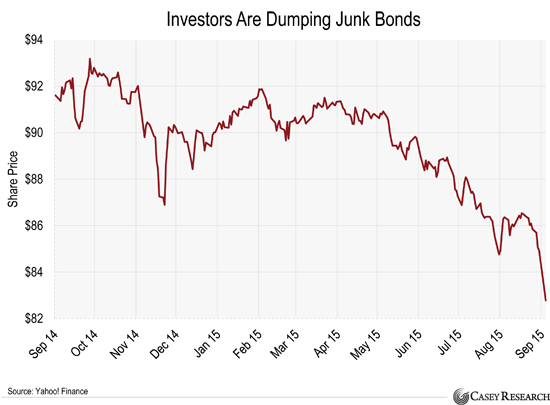 •  The bond market is reacting to seven years of easy money…

Regular readers know the Federal Reserve cut its key interest rate to zero in December 2008. The Fed has kept its key rate at zero for almost seven years.

The Fed’s key rate affects practically every other interest rate. Rates for mortgages, student loans, and corporate bonds are all near record lows.

Interest rates are lower today than they were when FDR or Napoleon or Henry VIII or Genghis Khan or Charlemagne or Julius Caesar or Alexander the Great or even Hammurabi were around. Or, if you want to put a year on it, lower than at any time since the ancient Sumerians made the first loans, payable in either silver or grain, back in 3000 B.C.

Millions of Americans no longer ask themselves, “Does it make sense to borrow this much money?”

For years, no business idea has been too dumb to fund...no $120,000 car has gone unsold to someone who couldn’t afford it…and no overpriced house has sat on the market for more than a month.

We call this the  “Wonderland” economy. Seven years of near-zero interest rates have warped prices of nearly everything. But the recent bond market action is a sign that “Wonderland” is starting to crack.

•  Like us, Bill Gross thinks zero percent rates have created a huge mess…

PIMCO became the world’s biggest bond fund under his watch. Today, Gross runs his own bond fund at Janus Capital. His nickname is “The Bond King.”

Low or zero interest rates it seems do wonders for asset prices and for a time even stabilize real economies, but they come with baggage and as zero or near zero becomes the expected norm, the luggage increasingly grows heavier.

Zero destroys existing business models such as life insurance company balance sheets and pension funds, which in turn are expected to use the proceeds to pay benefits for an aging boomer society.

Regular readers know that the public pension system is a slow-motion train wreck. State pensions have made trillions of dollars in promises they can’t possibly keep. Think tank State Budget Solutions estimates that state pensions are underfunded by $4.7 trillion. “Underfunding” is the difference between what they promise to pay and the amount of money they have on hand to actually pay it.

Now with corporate bonds at 2-3%, it is obvious that to pay for future health, retirement and insurance related benefits, stocks must appreciate by 10% a year to meet the targeted assumption. That, of course, is a stretch of some accountant’s or actuary’s imagination.

BlackRock (BLK), the world’s largest asset manager, agrees. It expects 85% of U.S. public pensions to fail over the next three decades.


Chart of the Day

As you can see, the average yield on corporate bonds has gone up from about 3.4% to about 4.1%.

This tells us that investors are demanding higher interest rates to loan money to stable companies. This is a huge red flag for the Wonderland economy. The economics of Wonderland only work when borrowing money is ridiculously cheap.

If rates continue to move up from zero, the Wonderland economy is in big trouble. 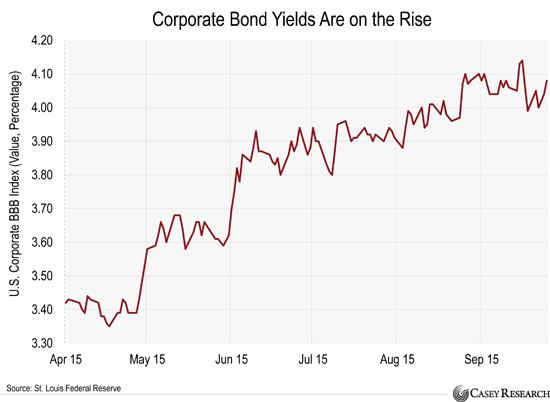 We want to hear from you.

If you have a question or comment, please send it to feedback@caseyresearch.com. We read every email that comes in, and we'll publish comments, questions, and answers that we think other readers will find useful.

Page 1 of 1
Permissions in this forum:
You cannot reply to topics in this forum
Who is online?
In total there are 128 users online :: 1 Registered, 0 Hidden and 127 Guests :: 3 Bots