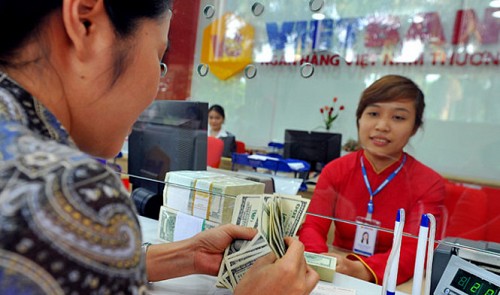 With about US$40 billion in foreign exchange reserves, the State Bank of Vietnam (SBV) will intervene in the forex market to shore up the value of the Vietnamese dong, whether the U.S. Federal Reserve (FED) raises interest rates or not, the central bank said Monday in a press release.

The SBV is willing to sell the foreign currency to strengthen the dong’s value when it has to do so in order to deal with any false expectation about the devaluation of the local currency, it said.

The possibility that the FED will hike interest has been reflected in changes in interest and exchange rates on the international financial market since the end of 2014.

This has been included in many scenarios visualized by the SBV, based on which the exchange rate and the average interbank trading band have been adjusted over the past months, the central bank said.

The dong-dollar exchange rate has been flexibly revised to cope with any adverse development in the domestic and foreign markets, not only from now until the end of 2015 but also the first months of 2016, it elaborated.
Any FED move to raise interest rates in the near future therefore will not affect the stability of the dong, the SBV asserted.

On September 17, the FED decided not to increase interest, given the fact that inflation has not reached the target of two percent and there have been so many fluctuations in world financial markets recently.

The FED’s decision, announced by its chairperson Janet Yellen, came out after the Federal Open Market Committee (FOMC) ended its two-day policy meeting.

In a press release issued immediately after the meeting, the FOMC said recent global economic and financial developments may restrain economic activity somewhat and are likely to put further downward pressure on inflation in the near term.

The FOMC continues to see the risks to the outlook for economic activity and the labor market as nearly balanced but is monitoring developments abroad, it said.

This suggests that changes in world economic and financial situations will continue to be important factors in the FED’s decision to hike rates in the near future.

After the press release was published, the rate of economists predicting the FED will raise interest rates in December, as surveyed by CNBC, plummeted to 64 percent from 84 percent before the meeting.

Some expected that the FED will not raise interest rates until March 2016, as oil and commodity prices continue to be at a low level and the global economy remains unstable, increasing the risks to the U.S. economy in the medium term.