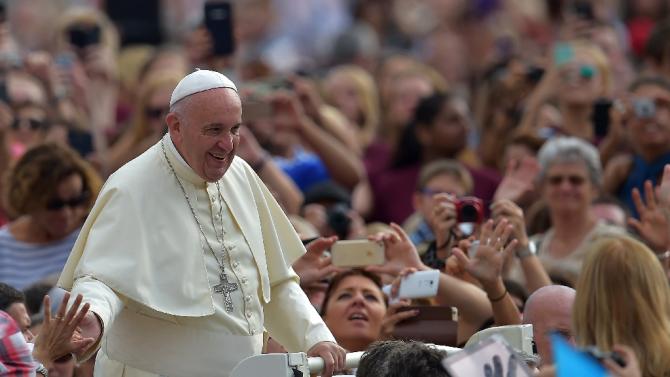 Pope Francis, pictured on Semptember 16, 2014, wears a cross that belonged to a Iraqi priest who was wearing it when he was slain for his faith (AFP Photo/Vincenzo Pinto)


Vatican City (AFP) - Pope Francis revealed Thursday that he now wears a cross that belonged to a Iraqi priest who was wearing it when he was slain for his faith.

He said he had been given it by another Iraqi priest he met on St Peter's square.

"It is a cross this priest had in his hands when he had his throat cut for refusing to renounce Jesus Christ," the pontiff told a gathering of young monks and nuns. "This cross, I wear it here," he added, indicating his chest.

Francis, who has regularly spoken out on the persecution of Christians in the Middle East, added: "Today we have more martyrs than in the first centuries (after Christ)."

The rise of the Islamic State grouping is the latest factor driving them out of the country with witnesses having recounted how the militant group threatens them with death or punitive taxes if they do no convert to Islam.