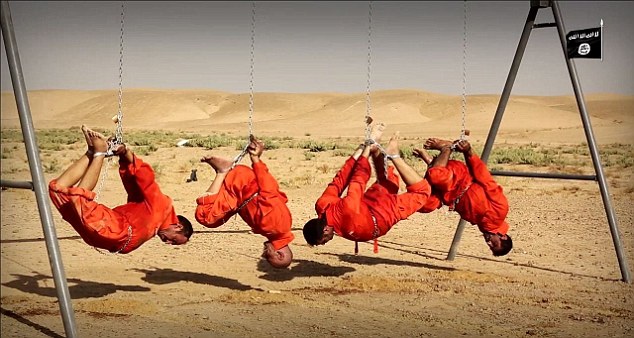 The execution of the four men follows footage released last week by Shiite fighters purporting to show a captured IS militant burned to death and mutilated by a rebel fighter nick-named Abu Azrael ("Father of the Angel of Death").

The four men were made to watch the video before being burned alive in the footage that was uploaded to social media sites. The victims were identified as fighters in the pro-government Popular Mobilisation forces from southern Iraq. They were suspended from a metal frame by chains attached to their hands and feet, then set on fire by the jihadists.
*****************
Tweet

Similar topics
» IIEA VIDEO: Dr Nader Hashemi Menace of the Islamic State of Iraq And Syria (ISIS)
» US military kills 2 Swedish Islamic State fighters in Iraq
» VIDEO: Former Iraqi FM Hoshyar Zebari: Shiite Militias in Iraq Are just Like ISIS
» WARNING GRAPHIC CONTENT - Yazidi Children Screamed and Cried Outside the Door While ISIS Fighters Raped Their Mothers
» Who are ISIS? The rise of the Islamic State in Iraq and the Levant