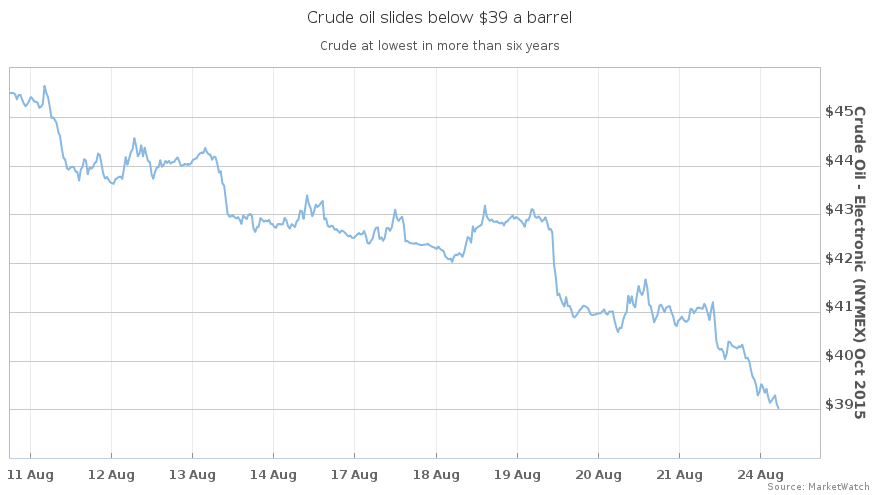 These are “epic times in the oil market,” said Matt Smith, director of commodity research at ClipperData.
Still, “while the market does look weak from a fundamental perspective, sub-$40 [Nymex] oil means a lot of bad news is being price in,” he said.

The oil losses deepened in the wake of losses in stock markets around the globe. In the U.S., the Dow Jones Industrial Average DJIA, -2.95%  plunged 1,000 points at the open, but it has since pared some of its steepest losses.

Oil prices have been under pressure for several months due to oversupply concerns, but the slump has deepened in recent weeks on fears of a sharp slowdown in the Chinese economy and its impact on global markets. The recent devaluation of the yuan has added to those concerns, stoking speculation that the slowdown will dent imports of oil and commodities by the world’s second-largest economy.

“From a pure demand perspective, the China risk is pretty much priced in,” said Matt Parry, senior oil analyst at the International Energy Agency in Paris, in an email. “The doomsday scenario at the moment, I suppose, is much weaker emerging-market growth worldwide.”

“The forward-looking balances, however, show signs of tightening, as relative demand growth in 2015-2016 outpaces forecast non-OPEC supply—the key wildcard being OPEC and Iran in 2016,” he said.

Re: Crude’s drop below $38 marks ‘epic’ time in the oil market

Someone should call the oil companies and let them know that prices have dropped.

Yesterday at 2:51 pm by Ssmith

Yesterday at 2:50 pm by Ssmith