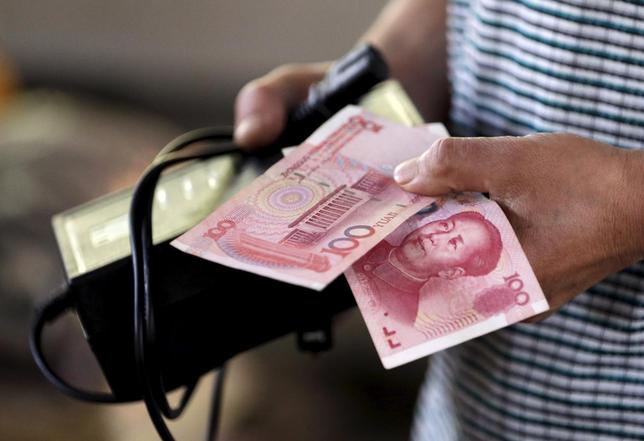 
Recent changes to how China manages its currency could bring the country "quite close to a float" in its exchange rate, a top International Monetary Fund official said on Friday in a review of the country's economy.

The new system in theory could allow the currency value to move as much as 10 percent a week and be close to a rate that markets might set on their own, Markus Rodlauer, the IMF's mission chief for China, said.

Authorities are still likely to intervene in currency markets for now, Rodlauer said, but "this lays the basis for greater flexibility. ... We don't expect a free-floating system tomorrow. We expect some continued management. But we hope it will gradually lead to more flexibility and a float within two to three years."

Rodlauer said that even with the decline of the yuan's value that followed introduction of the new system, the IMF feels the Chinese currency is no longer undervalued - an important acknowledgement on an issue that has roiled trade and political relations between China and the United States.

Rodlauer's comments came as the IMF released its annual review of China's economy, a report completed before the new currency policy was announced this week.

The IMF said China should allow its economy to continue slowing over the next year as it presses forward with more market-based reforms to its credit and financial systems.

China remains vulnerable to a financial shock, continues to run a large current account surplus, and could pose a risk to global growth if its continued transition to a market-based economy is not managed well, the IMF wrote.

The report follows a tumultuous year in which China's ebbing growth, plummeting demand for commodities and stock market volatility made the once roaring Asian giant seem scarily vulnerable.


Failure to continue needed financial and other reforms, the fund said, "continues to pose the biggest risk to the outlook. If realized, it could result over the medium term

in a disorderly correction," - the "hard landing" that some analysts worry could damage the global economy or leave the country stranded at its current low level of per capita income.

The fund's annual report gave Chinese authorities positive marks for managing the recent slowdown of their economy, beginning to liberalize the financial system, and starting to curb some of the over-investment in real estate and other assets that are considered a risk to financial stability.

"China is transitioning to a new normal, with slower yet safer and more sustainable growth," the IMF said, noting that the country had slowed credit growth by more strictly regulating shadow banks, managed through a stock market downturn, and is gradually moving to more consumption-based growth as the IMF and others have recommended.

Over reliance on investment is considered a key risk in China, with local governments and banks investing heavily in real estate and other projects that may not be economically viable.

As the shift away from investment continues, the IMF said, the country should prepare for slower growth in the medium term. The IMF said officials should "calibrate" fiscal and other policies toward a growth rate of as little as 6 percent next year, compared with an estimated 6.8 percent this year and growth in excess of 10 percent before the 2007 global financial crisis.

Trouble in China has held down global commodity prices and posed a risk to growth in other countries, including the United States. While cheaper oil and copper helps consumers and producers, it has also bedeviled officials at the Federal Reserve and other central banks trying to forecast inflation.

Page 1 of 1
Permissions in this forum:
You can reply to topics in this forum
Who is online?
In total there are 49 users online :: 0 Registered, 0 Hidden and 49 Guests :: 3 Bots