What is it with those people?  I mean they must thrive on all the publicity.  Seems to me they would be embarrassed by the continued unrest and being unable to solve their problems.  Much less have them showcased throughout the world by the mass media.  It never ceases to amaze me.

It is bad enough that people have to kill people, but then they have to "riot" and rob and burn their own town down.  Maybe it is time to export a new thing - people who continue to riot, rob and burn.  I don't think that they are really desirable people to have around.

It would do all of more good to turn on the media and find nothing but GOOD for a change,  But that doesn't sell does it?  Why do we let the media shape our lives so?  Time to stand up and say, "NO MORE, MEDIA BEHAVE AND QUIT STIRRING THINGS UP."  Seems to me that if it wasn't newsworthy, it wouldn't happen so often.

TURN OFF THE CAMERAS, MICROPHONES, AND HEADLINES, it's for our national good.

Peaceful commemorations turned violent late Sunday night. What was marketed by activists and community organizers as a “peaceful event” quickly morphed into a scene out of New Jack City, albeit without the bling.


All bets were off when armed street agitators and police exchanged gunfire last night.

County officials declared a ‘state of emergency’, citing violence by demonstrators as crowds converged on the town of Ferguson, Missouri to mark the one-year anniversary of the death Michael Brown.
“The recent acts of violence will not be tolerated in a community that has worked so tirelessly over the last year to rebuild and become stronger,” said St. Louis County Executive Steve Stenger.

Regrettably, mobs could not resist looting some of the very same stores which they destroyed on multiple occasions in 2014. 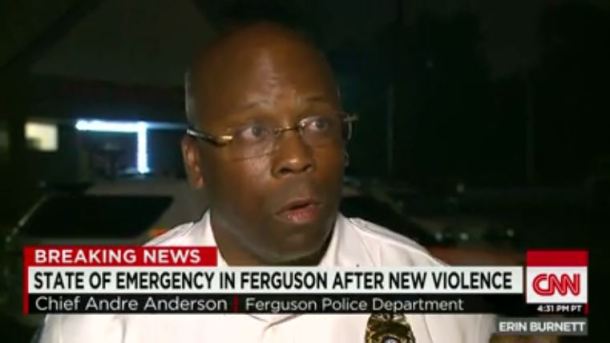 In a surreal scene, Ferguson’s new police chief, Andre Anderson (photo, above), was talking to CNN on Sunday evening when dozens of rounds were fired in multiple directions by both street thugs and police. It quickly spiraled into a full-on disaster.
One victim of the chaos was Ferguson resident Tyrone Harris, 18 year old, allegedly a ‘friend of Michael Brown’. Harris exchanged gunfire with police, before he was shot by police and is said to be in critical condition tonight. 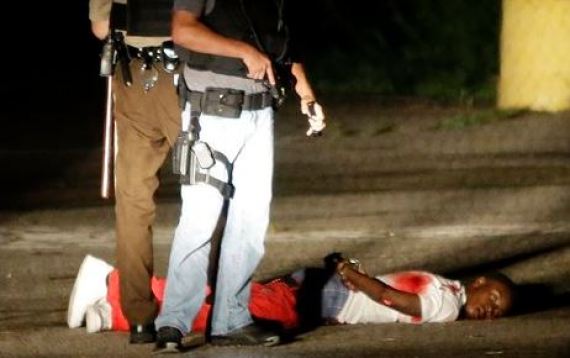 Shooter Harris has since been charged with assault, although his family are publicly denying any wrong doing, claiming, ‘He would never do a thing like that’.

The Atlantic reports: “The Washington Post reported that Deray Mckesson, Johnetta Elzie,  Kayla Reed and Cornel West were arrested Monday outside the St. Louis Justice Center. Some 150 activists had staged a sit-in at the location to mark the anniversary of Brown’s death, and some of them, St. Louis Post-Dispatch reports, climbed over barricades set up outside the building, “sat down, locked arms and began singing and chanting.” The newspaper adds: “When that protesters’ move did not produce any arrests after about 20 minutes, the seated group rose and rushed toward the front door of the courthouse, and sat down again. Shortly after that, about 30 members of the St. Louis Police Department arrived on the scene and arrests began.”

Thus far, more than 50 people have been arrested for various offenses ranging from disturbing the peace, assault, vandalism and looting.

Some critics questioned the basis for the entire public outrage over the Michael Brown case, when it was later proven that Brown did not have his ‘hands up,’ but in fact attacked Darren Wilson before being shot during his violent altercation with the officer. Unfortunately, few bother to acknowledge this fact, as many members of the media continue to lead the public along a false narrative of how those events actually unfolded last year.

More sadly, though, is the fact that questionable police shootings in America are almost a daily event.

YES AGREED, I SAW THE NEWS STORY WHILE I WAS WORKING OUT LAST NIGHT, THE HEADLINE WAS COPS SHOOT BLACK MAN ON ANNIVERSARY OF MICHAEL BROWN. WELL WHEN I TURNED THE VOLUME UP A STORE OWNER THAT WAS BEING INTERVIEWED STATED THAT IT STARTED B/C A FEW PEOPLE WERE STEALING A TV FROM A STORE THAT HANDS OUT FREE FOOD, COPS GOT CALLED, PEOPLE RESISTED, AND GUNFIRE ENSUED. IT'S FREAKING RIDICULOUS. IF I HAD NOT HAVE TURNED THE VOLUME UP I WOULD HAVE NEVER KNOWN. IF YOU ACT LIKE A CRIMINAL, YOU WILL GET TREATED LIKE ONE. WHY OH WHY IS THAT SO HARD FOR PEOPLE TO UNDERSTAND.

I NEVER WILL UNDERSTAND THE PROTEST OVER A CRIMINAL GETTING SHOT, RIOTING B/C OF IT, ETC... IT'S STUPID AND A MAJOR THING THAT IS WRONG WITH THIS COUNTRY RIGHT NOW.
*****************
Leadership is a potent combination of strategy and character. But if you must be without one, be without the strategy. - Norman Schwarzkopf, Jr.

Page 1 of 1
Permissions in this forum:
You can reply to topics in this forum
Who is online?
In total there are 84 users online :: 0 Registered, 0 Hidden and 84 Guests :: 3 Bots