Turkish fighter jets have struck Islamic State targets in Syria and the government has rounded up hundreds of suspected militants in a coordinated crackdown as the country deployed military force for the first time against the terror group.

The bombing is a strong tactical shift for Turkey, which has long been reluctant to follow the US-led coalition into taking military action against Isis.

Prime Minister Ahmet Davutoğlu’s office said Turkish F-16 warplanes based in Diyarbakir attacked three Isis targets with guided bombs at dawn on Friday, including what it described as headquarters of the militant group and an assembly point.

Turkey is also to allow the US-led coalition to use its Incirlik airbase to conduct strikes against Isis in a reversal of policy that follows a cross-border attack by the militants that killed a Turkish soldier and a suicide bombing this week that killed 32 people in the southern province of Suruç, just a few miles from the border.

Davutoğlu’s office further announced that Turkish police have detained at least 297 people in orchestrated raids across the country, targeting suspected cells of Isis and the Kurdistan Workers’ Party (PKK). In Istanbul, one female member of the radical leftist DHKP-C was reportedly killed during the operation.

On the day of the Suruç bombing one Turkish soldier was killed during a PKK attack in Adiyaman, while two police officers were found dead in an apartment in Ceylanpinar on Tuesday. The PKK claimed responsibility for the killings of the policemen, saying the officers were shot “in retaliation for the suicide bomb in Suruç”. In Istanbul and Adana, two men suspected to be Isis members were killed by attackers with ties to the PKK, according to Turkish media reports.

The statement from Davutoğlu’s office said the raids were conducted “without distinction” against all terrorist groups in 13 provinces.

In Istanbul several Isis members were detained, many of whom are reported to be foreigners. According to the Turkish daily Milliyet, ammunition, weapons and Molotov cocktails were seized in several cities during the operation.

The air strikes and raids come as a wave of deadly violence – including the attack in Suruç, the PKK killings and the cross-border attack by Isis – threatens to draw Turkey further into the Syrian quagmire.

Tension has risen dangerously in the predominantly Kurdish south-east, where many have long accused the AKP government, led by president Reçep Tayyip Erdoğan, of directly supporting Isis against the Kurdish struggle in Syria, a charge Ankara vehemently denies.

On Thursday a traffic policeman was shot on duty by unknown assailants in the predominantly Kurdish city of Diyarbakir.

Friday morning’s bombings followed a decision by Turkey to open the key Inçirlik air base near the border with Syria for its western allies launching air strikes against Islamic State targets in Syria.

American officials told the New York Times they had reached a “game changer” agreement with Turkey that would allow the US-led coalition against Isis to use manned and unmanned aircraft to strike at the militants from air bases in Incirlik and Diyarbakir.

Erdoğan confirmed the agreement, which he said allowed for operations “within a certain framework”. He did not elaborate on the agreement’s details.

Turkey, a Nato member, had long resisted calls by Barack Obama’s administration to allow the coalition to use bases in the country as staging grounds for coalition air raids.

Turkish media reported on Friday that the deal with the US foresees a 56-mile no-fly-zone along the Syrian border to back up a “safe zone” on the ground aimed at preventing infiltration by Isis and other jihadis and to discourage a new flow of refugees to Turkey.

Turkey had previously insisted on a no-fly-zone in exchange for US use of its airbases, but US officials said on Thursday it was not part of the deal. 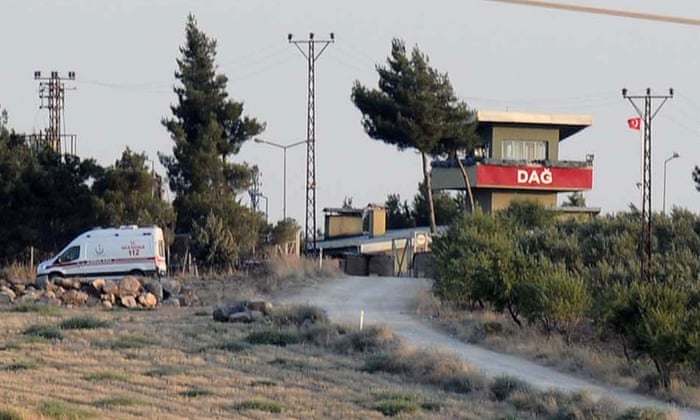 Kilis on the Turkey-Syria border, where an attack by Isis has apparently prompted cross-border strikes against Isis by Turkish jets.
Photograph: Mert Macit/Xinhua/Corbis