What Will Happen to the Rial?

What Will Happen to the Rial?

What Will Happen to the Rial?  TNT members discuss the issue.


DUBAI, July 15 (Reuters) - Iran's central bank governor indicated on Wednesday that Tehran was keen to dampen any rise in the rial due to optimism over the lifting of economic sanctions after its nuclear deal with world powers.


The rial, which suffered under the sanctions, has edged up to around 32,450 against the U.S. dollar in the free market after Tuesday's nuclear agreement from 32,550 at the end of last week, according to Iranian foreign exchange websites.


Growing optimism about the post-deal economy could prompt Iranians to change back into rials billions of dollars that they converted into hard currencies and gold, putting upward pressure on the currency's value and eventually hurting Iranian exports.

"We saw a slight drop in the dollar price after the nuclear deal, but this won't continue in the long run," central bank governor Valiollah Seif told reporters after a cabinet meeting, according to the Iranian Labour News Agency ILNA.

Iran currently operates two exchange rates, the free market rate and an official rate used for some state transactions, which is now at 29,499.

In recent months, the central bank has been raising the official rate gradually to shrink the gap between the two. It has said it wants to eliminate the difference entirely, to make the economy more efficient by putting private firms on an equal footing with state institutions.

Seif said on Wednesday that the central bank would need five to six months after the nuclear deal was implemented to unify the exchange rate. "Preparations have already started," he said.
The nuclear agreement will be implemented once the International Atomic Energy Agency has verified that Iran is keeping to its side of the bargain.

That may happen around the end of this year, giving Iran access to over $100 billion of assets frozen abroad by the sanctions, according to U.S. officials.

"Implementation of a single forex rate is easier for the government when it has enough foreign exchange reserves, so that a market shockwave will not stop the policy," government spokesman Mohammad Baqer Nobakht said on Wednesday.

winneriam
Then we should buy more at these prices. I cannot imagine asset backed money not appreicating when the country is over-flowing with oil. Go RV.

tishwash
I don't believe this  sounds like smoke to me

Dr M J Randy
Dear Lobodeoro,
Very interesting since on both their radio and tv they are announcing that their currency will be worth in excess of $3.00 U.S. per Rial.
Take care, stay well and God bless. I suggest you listen to the nightly Iranian Rial conference call each night. Below is the conference call information:
"Come & Let Us Reason Together" Conference call with Mr. KJ, Ms. JW & Friends.

Before you come to the call, PLEASE CLEAR YOUR MIND first from all the past Dinar guru issues, fear's and misinformation, so you can see this blessing clearly evolving right before your eyes. We will ONLY be discussing the FACTUAL INFORMATION on the Iran Nuclear negotiations, which will result in ALL FINANCIAL, BANKING SANCTIONS BEING REMOVED and the Iranian Rial currency being reinstated soon after. Also we will have Q & A to be discussing various concepts of Asset Protection Strategies concerning this financial blessing. Scripture, "Be Anxious For Nothing"... See you there and tell your friends....Were on a clock, tic toc...
Take care, stay well and God bless.

Watching Iraqi facebook sites, the Iraqi's are scooping up as much of the Rial as they can get their hands on.  As fast as they can.

From what I am finding on historical exchange rates, if there is a reinstatement, it will be NO WHERE near USD $3.00

The Iranian Rial remained relatively stable up until late 2011 when it lost two-third of its value within two years.[9] 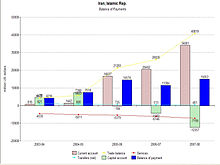 Iran's balance of payment (2003-2007). Its capital account (both long and short term) has been decreasing during that same period.[11]
In 1932, the exchange rate with the British pound was 1 pound = 59.75 rial. This changed to 80.25 in 1936, 64.350 in 1939, 68.8 in 1940, 141 in 1941 and 129 in 1942. In 1945, Iran switched to the U.S. dollar as the peg for its currency, with 1 dollar = 32.25 rial. The rate was changed to 1 dollar = 75.75 rial in 1957. Iran did not follow the dollar's devaluation in 1973, leading to a new peg of 1 dollar = 68.725 rial. The peg to the U.S. dollar was dropped in 1975.
In 1979, 1 rial equaled $0.0141. The value of Iran's currency declined precipitously after the Islamic revolution because of capital flight from the country.[12][13] Studies estimate that the flight of capital from Iran shortly before and after the revolution is in the range of $30 to $40 billion.[14] Whereas on 15 March 1978, 71.46 rials equaled one U.S. dollar, in July 1999, 9430 rials amounted to one dollar.
Injecting sudden foreign exchange revenues in the economic system forms the phenomenon of "Dutch disease" in a country. There are two main consequences for a country with Dutch disease: loss of price competitiveness in its production goods, and hence the exports of those goods; and an increase in imports. Both cases are clearly visible in Iran.[15] The solution is to direct the extra revenues from oil into the National Development Fund for use in productive and efficient projects.[16]
Although described as an (interbank) "market rate", the value of the Iranian rial is tightly controlled by the central bank. The state ownership of oil export earnings and its large reserves, supervision of letters of credit, together with current - and capital outflow account - outflows allows management of demand. The central bank has allowed the rial to weaken in nominal terms (4.6% on average in 2009) in order to support the competitiveness of non-oil exports.
There is an active black market in foreign exchange, but the development of the TSE rate and the ready availability of foreign exchange over 2000 narrowed the differential to as little as IR100 in mid-2000.[17] However the spread increased again in September 2010 because channels for transferring foreign currency to and from Iran are blocked because of international sanctions.[18][19]
Monetary policy is facilitated by a network of 50 Iranian-run forex dealers in Iran, the Middle-East and Europe. According to the WSJ and dealers, the Iranian government is selling $250 million daily to keep the Iranian rial exchange rate against the US dollar between 9,700 and 9,900 (2009).[20] At times (before the devaluation of the rial in 2013) the authorities have chosen to weaken the national currency intentionally by withholding the supply of hard currency to earn more rial-denominated income, usually at times when the government faces a budget deficit.[21]
The widening of the gap between official and unofficial exchange rates in 2011 stands at over 20% (as of November 2011). This shows the correlation between the value of foreign currencies and the domestic inflationary environment.[22]
The unofficial rial vs. US dollar rate underwent severe fluctuations in January 2012 (losing 50% of its value in a few days, following new international sanctions against the CBI), eventually settling at 17,000 rials at the end of the period. Besides all the bad effects on the economy in general, this had the effect of boosting the competitiveness of Iran's domestic industries abroad. Following President Ahmadinejad's decision to liberalize the mechanism by which bank interest rates are set (granting banks the authority to raise interest rates to 21%),[21] CBI announced that it would be fixing the official rate of the rial against the dollar at 12,260 rials from 28 January 2012 and seek to meet all demand for foreign currency through banks.[21][23][24][25][26]
On September 25, 2012, the Iranian rial fell to a new low, trading at 26,500 to the US dollar. The drop followed the government's launch of a foreign exchange center a day before, that would provide importers of some basic goods with foreign exchanges, at a rate about 2% cheaper than the open market rate on a given day. The announced rate at the center on September 24, 2012 was 23,620 rials to USD.[27] By early October 2012, Rial had further fell in value to about 38,500 Rials per USD in the free market. The Iranian rial was officially devalued in July 2013.[7]
Official exchange rates Rials per US dollar[28]
[th]Year[/th][th]Market rate[/th]

Oops... link for above info:

Very interesting since on both their radio and tv they are announcing that their currency will be worth in excess of $3.00 U.S. per Rial.

winneriam
Then we should buy more at these prices. I cannot imagine asset backed money not appreicating when the country is over-flowing with oil. Go RV.

Yep, let's ignore financial realities not to mention the simple fact that it is still illegal to posess Iranian Rial in the US.
*****************
Trust but Verify --- R Reagan

Hey, Tony's site is where this is coming from, what's the chances they would lead one astray?  Yep, 100% for.

I think one had better pass this one by.  Let the middle easterners have this one - personally we should not care - according to Tony's site some are already exchanging dinar over here so why get greedy?