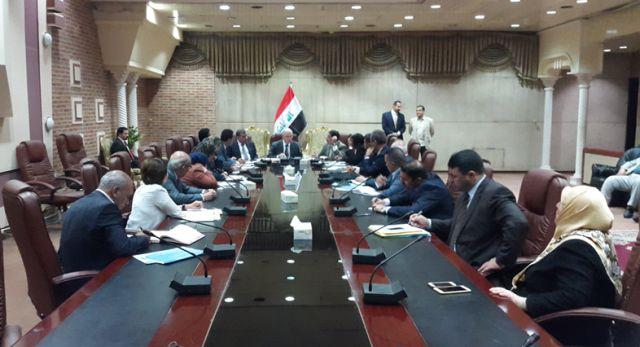 Parliamentary Finance Committee held an extraordinary meeting headed by MP Ahmad Chalabi, Chairman of the Committee and the presence of ladies and gentlemen members of the committee Sunday, 06.21.2015 which hosted the Governor of the Central Bank on the Keywords . And it discussed the hosting which was attended by the President of the Association of private banks and general manager of the fight against organized crime and director of the Office of Financial Supervision rise of the dollar auctions. For his part, Mr. Chairman of the Finance Committee suggested Ahmad Chalabi edit the dollar in stressing the need to change the settings menu for the defense of the dollar in Iraq price and ways to reduce the demand for cash through examine the possibility of "Aldravc" and Altravl Jack "and how to deal with correspondent banks and accounting organization groups that manipulate its price according to the Banking Law and the powers of the relevant authorities and wondered about the aspects related to the exchange rate and monetary policy. Mr. Governor of the Central Bank and accept it in response to questions, Mr. Chairman, ladies and gentlemen members of the Finance Committee reports available and the facts with the Central Bank expressed its full cooperation with the Finance Committee, valuing the supervisory role that is doing to undermine corruption and financial mafias hidden in banks, which play a critical role in the deterioration of the money and the economy as a result of money laundering, and an agreement of vision between the higher authorities to support these trends to combat money is clean and surround these cases that come at the expense of the lives of the citizen and the delivery of the dinar to him without resorting to cash dollar in the hope that such meetings are repeated to serve the economy and the protection of public money. He urged the member of the Finance Committee MP Haitham al-Jubouri to take action on the infamous private banks by private banks which led to the deterioration of the exchange rate Association. At the end of the hosting thanked the President of the Finance Committee, Governor of the Central Bank proposals and full cooperation in the statement of explanation and detail service in the public interest, and also came up with recommendations will be examined by hosting and lifting and dissemination of public opinion competent and relevant authorities.