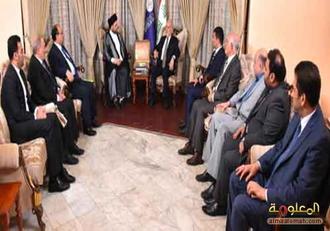 Jaafari said in a statement issued today, after al-Hakim to meet him, and received by the agency / information /, a copy of which, "The meeting included discussed the overall political and security situation and the developments of the war against Daash terrorist gangs and the sacrifices made by the armed forces and the people of the popular crowd and the Peshmerga and clans in the fight against terrorism."

He added that "it was the review of the Iraqi diplomatic efforts to return Iraq's relations Arab, regional and international surroundings," noting that "has been emphasizing the importance of keeping national unity and to take the National Alliance role in promoting an atmosphere of trust and cooperation between all the political forces and the return of security, stability and prosperity," .anthy / 25 SOURCE
*****************
Tweet