This was posted by FinallyTYGod @ TNT. You can bet there will be an Indictment against Sterling down the road.

I'm sorry folks, but I have never seen so many scared, uninformed sheep in my life... This is the main reason I am hardly EVER on chat, nor do I read many posts.

FIRST OF ALL, let be debunk some of the "facts" regarding this piece of garbage floating around, calling itself "the Sterling Indictment"

1. There is a timely process that is required to hand out an indictment... weeks, sometimes MONTHS are required in order to collect enough evidence by prosecuting attorneys to send to the grand jury. There is no grand jury sitting around waiting to be called... it has to be formed and that in itself can take weeks.

2. NO INDICTMENT that is handed down by a grand jury is EVER made public. It is a SEALED document and ONLY court employees are privy to that information... prosecution and defense attorneys, judges and jurors are the ONLY people who get to view indictments.

3. FBI agents DO NOT have ANY part in the process of forming indictments, let alone PUT THEIR NAME ON IT!!! FBI agents' jobs are to collect evidence... evidence to be presented to a grand jury for the purpose of determining whether there is enough to warrant an indictment.

4. In the USA, when there are crimes that involve currency of any form, the FBI has NOTHING to do with the investigation! The UST has its own force called FINCEN (Financial Crimes Enforcement Network) that handles ALL investigating including money laundering, counterfeiting and tax evasion.

WAKE UP PEOPLE!!! THIS IS ANOTHER SMOKE SCREEN!!! You need to calm yourselves and think about this one thing... if it is made public that ANYONE could get involved with this investment and were never told by their government or financial institutions... can you imagine the uproar and rioting there could possibly be? I know Tony says that only those who take the contract rate will need to sign NDAs, but I believe we will ALL have to sign one, no matter what rate we take. It's bad enough that the economy in this country is in bad shape, but if this were to go public? I shudder to think of what the consequences could be or what the masses would do.

Gee...   an application to the Court from a Federal agency who seeks to impound and seize financial and physical assets resulting from probable criminal activity is now an INDICTMENT?

Let's put it this way.  Given that the spread of income from dinar sales and reserve programs is in the HUNDREDS of millions of dollars per year, paying a paltry $100 to various posters who come up with noise to keep the sheeple calm is a pittance.  Maybe it's $50.  I don't know.  Maybe it's 0 and the person is just a Kool Aid drinker holding on to the rapidly fading hope that this still is what was promised.

I am not even going to put much time into pointing out how wrong posters such as this are.

Won't stop me from believing that the more vociferous the post, the bigger the chance that the poster is a paid shill.

Folks, you are watching history being made.   One day, people will link back to messages like this and allow others to understand how desperate people became when their dreams were blown up.  Think not?  Go back and look at the message boards for Warka Bank as it blew up.  Or even better, go look at the timeframe when people were starting to get worried when 14DailyPlus went screwy.  Those messages are there and you can see the development of the understanding that came with time.   Not much different than what you are seeing here really.

This is history in the making.  Sit back and watch.  Watch for the pumpers to up their game and for more people beginning to question what is going on.  Someday, and I am sure of this, there will be a horrified acceptance of reality by most.  (People who believe in Prosperity Packages are excluded as they are beyond the ability to reason in my opinion)

First, Indictments MAY be sealed, or not, that is at the discretion of the judge to whom it is presented.
Second, FinCEN researches and analyzes banking information and other critical forms of intelligence to support financial criminal investigations. They do not do field work.
Third, the FBI is responsible for investigating and combating white collar crime.
Fourth, gathering evidence is EXACTLY what the FBI has been doing.
Last but not least, the very existence of a Federal Complaint indicates that a grand jury has already met and passed down an indictment. 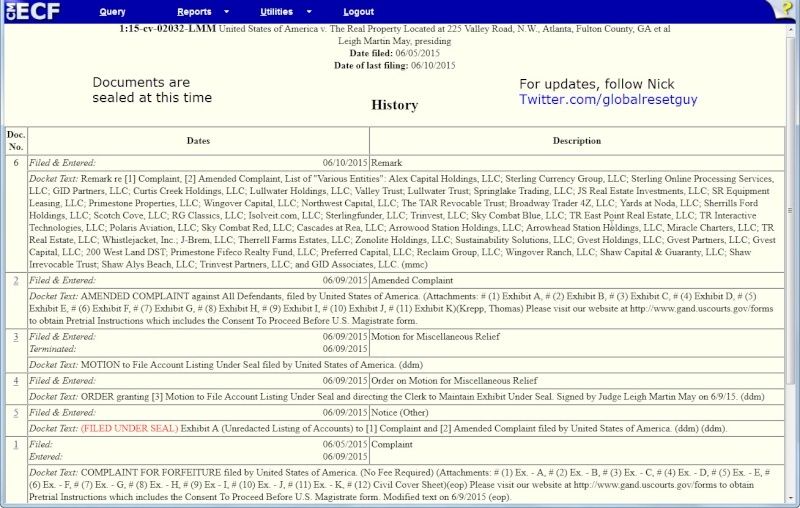 " />
GUESS WHAT.... THERE ARE SEALED DOCUMENTS FILED AT THE COURT!

Hey Cascadian,  You wrote:  "Folks, you are watching history being made.   One day, people will link back to messages like this and allow others to understand how desperate people became when their dreams were blown up"

You're right.  I don't know how this compares to other scams, but it has to be up there.  It got me thinking about the Dinar History Museum that Winston is always talking about.  Maybe they will have a special wing just for us!  LOL
*****************
>>>TNTBS's YouTube Channel<<<

There may well be, it is not unusual for sealed indictments to be sealed until charges are filed.

NO INDICTMENT that is handed down by a grand jury is EVER made public. It is a SEALED document and ONLY court employees are privy to that information... prosecution and defense attorneys, judges and jurors are the ONLY people who get to view indictments.

This quote is completely false, and what I was addressing. Further, if you examine the (I assume) screen shot carefully, you will see the only things that are sealed have to do with the listing of accounts.
*****************
Trust but Verify --- R Reagan

Madoff was $67 Billion and I am sure that others were pretty high.  But this is more widespread in terms of the sheer number of people affected.

Page 1 of 1
Permissions in this forum:
You cannot reply to topics in this forum
Who is online?
In total there are 152 users online :: 1 Registered, 0 Hidden and 151 Guests :: 2 Bots