WTF is wrong with people who write this stupid stuff & think it's funny????  This is from Lake Lady @ TNT.

TONY knows everybody!!! TONY was bragging to DC one day...
"You know, I know everyone there is to know. Just name
someone, anyone, and I know them."

Tired of his boasting, DC called his bluff...
"OK, TONY how about Tom Cruise?"

TONY and DC fly out to Hollywood and knock on Tom Cruise's
door, and sure enough, Tom Cruise, shouts, " TONY! Great to see you!
You and your friend come right in and join me for lunch!"

Although  impressed, DC is still skeptical. After they leave
Cruise's house, he tells TONY that he thinks TONY’s knowing Cruise was
just lucky.  "No, no, just name anyone else," TONY says.

"Ya sure," TONY says, "I know him. We'll just fly out to Washington to see him."

At the White  House, Obama spots TONY on the tour and
motions him and DC over, saying, "TONY! What a surprise!
I was just on my way to a meeting, but you and your
friend come on in and let's have a cup of coffee first and catch up."

DC is visibly shaken now, but still not totally convinced. After they
leave the  White House grounds, he expresses his doubts to TONY,
who again implores him to name anyone else.

Skeptical about all that, DC tells the plane captain to fly to Rome
TONY and DC are assembled with the masses in Vatican Square when

TONY tells DC:  "This will never work. I can't catch the Pope's eye among all these
people. Tell you what, I know the guards so let me just go
upstairs and I'll come out on the  balcony with the Pope."

And he disappears  into the crowd headed toward the Vatican . Fifteen
minutes later TONY emerges with the Pope on the  balcony.

By the time TONY returns, DC has had a heart attack and is
on the ground surrounded by paramedics. Working his way to DC's side,
TONY asks him, "What the heck happened to you?"

DC looks up and says, "I was doing fine until you and the Pope
came out  on the balcony and the Japanese tourist next to me asked,

'Who's that on the balcony with TONY?’

absolutely THE funniest post I've read to date and I've read a lot! thank you for the side splitting humor. Probably the truth though.
**************

Oh my. ROFL. I actually laughed out loud on this one. I don't do that often.

I'm with you SSmith...besides it not being a very funny or original joke...the other sheeple are laughing at it too!!

What, nobody spewing coffee on their computer?   Idiots.

Just somebody else trying to get their daily brownie points. 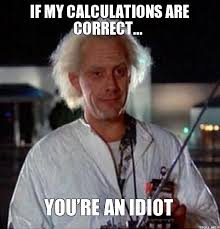 Similar topics
» Tony, Tony Tony.... Pulling stuff out an orifice again? (and maybe good riddance)
» For your view ing entertainment - TNT Tony Tony Tony thanks for the laughs
» TONY TONY TONY you are filled with BOLONEY
» TNT Call Notes 7/16/21 - "TONY - I TALK TO UST STRICTLY ABOUT THE RV - AND THEY ARE SAYING BY THE END OF THE MONTH" (Tony Talks To The UST??? His Restitution? LOL)
» Tony Refrow (TNT Dinar/Turbo Tony) and Ray Renfrow (RayRen98) both facing Federal Charges