I only started watching Twitter after Tony did his big "get the word out on Twitter campaign" 18 months or so ago, but the guy below has posted A LOT in the time since then.  Here's a couple screen caps. 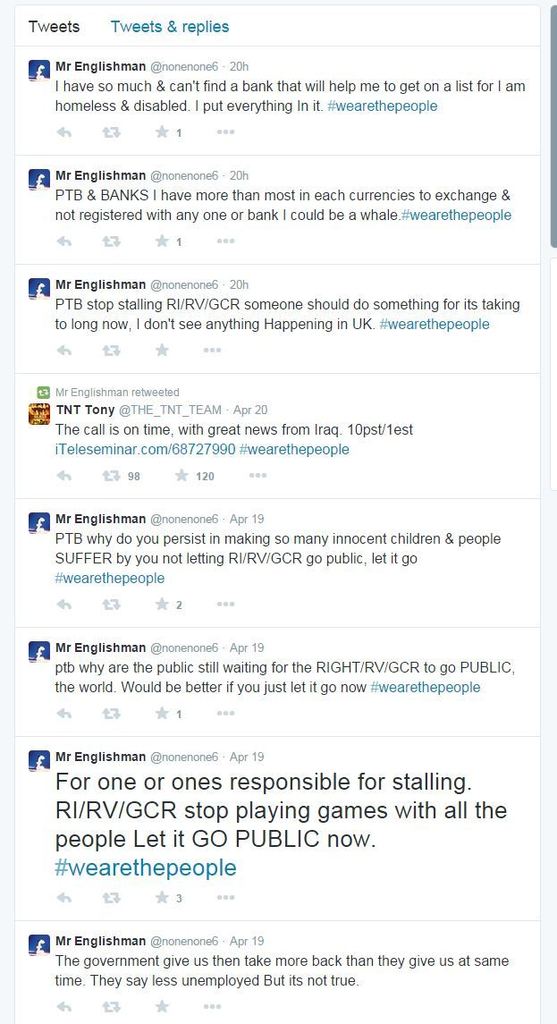 Homeless.  Disabled.  Poor.  Has all of his net worth in hyperinflated currencies (or paper that isn't even a currency, like the zim dollar) that have zero chance of significant appreciation.

Think about what this guy could do if he, as he says, has millions of each of these currencies.  It'd be enough money to rent himself a cheap apartment, buy himself some decent looking clothes, and go out and get a job.  Instead of that, because of the gurus and all the investors reinforcing what the gurus are saying (and even if you think all the gurus are liars, but are still saying that the RV could happen, you're still backing up the basic premise of the con artist gurus), this guy is holding onto all his currency and living on the street.

So when someone asks me "if you don't believe in the RV why are you wasting your time posting", just reference this thread.  And mostly that has happened at other sites, but pretty sure it happens here as well.  I wish I'd copied and pasted every story I've ever heard about the damage the RV scam has caused over the years, but unfortunately I didn't.  Many of them are (or were, haven't checked lately) available from Tony himself, in his "Tell us your dinar story" type threads that he made public.  Needless to say, the RV/GCR scam has caused or contributed to immeasurable financial problems, breakups, divorces, bankruptcies, etc.  Possibly even some suicides.  The damage the scam has done is really immeasurable.  So anyone that has the audacity to question my motives, think about that.

Mr Englishman here is a lost cause.  It's sad, but anyone that has listened to (and believed wholeheartedly) Okie and Tony for so long, I don't think there's anything that can be done for them.  They're so far divorced from reality that there's no way to reach them.  But not everyone is like that. Which is why it's important for when, some newcomer googles dinar/RV, that they see some action truth about it. And this site is damn near the last one that'll let anyone tell the truth without immediately censoring and banning them, so props to Ponee for allowing it.

I've tried to talk sense into Englishman for a year but like u said he's to far gone. I've awakened at least a couple of 1000 #wearethepeople since Jan 2014 and really except for a few newcomers the rest are in the land of OZ and don't want to hear anything about the turd being a conman or the rv a scam. I've been attacked and my accounts suspended 100s of times but I still try and wake up the newcomer. Turd has given out my phone number on his calls a couple of times but it has back fired bc I end up talking sense into a few of his diehard koolaid kiddies lol. I've been Mike Diston, Al Aziz and countless others but I use my real name now Kenny but FTTT, Matters, and a few others gang up and get me suspended for harassment but I've complained to twitter about TNT TONY countless times using twitter to run his scam but bc he has 241,000 followers I guess it's ok lol. PEACE PEOPLE

I love reading tweets like this. These people are delusional as hell...and it's beyond sad...its gotten to the point of humorous now. These twitter warriors spend hours dropping the latest TNT catchphrases...think that banks and the infamous "PTB" have people sitting around reading said tweets and acting upon them???  It is just insane.

Wouldn't it be entertaining to have picketers outside courthouse that catches the news station attention on the day Tony gets sentenced. Maybe that would wake some people up so they can move on and actually better their situations.
*****************
Leadership is a potent combination of strategy and character. But if you must be without one, be without the strategy. - Norman Schwarzkopf, Jr.

He's my favorite TNT IDIOT on twitter I've made his life in the dumpster hell LMAO Here's some tweets Mr Englishman ‏[ltr]@nonenone6[/ltr]  10h
10 hours ago
@cgm807 @gkilti I do and twitter should ban him. He will see when we exchange and he is poor. Thanks  Mr Englishman ‏[size=13][ltr]@nonenone6[/ltr]  11h[/size]
11 hours ago
@cgm807 @gkilti it's hard he keeps using different usernames and harassing me I keep reporting him but I will not give in its just hard 4 me Here he thinks I'm a TNT TURD follower in Baghdad LMAO Mr Englishman ‏[size=13][ltr]@nonenone6[/ltr]  Aug 17[/size]
@ramyzuar thank you and I hope all of you in Iraq as a better life when it's over and.your country as the dinar baking too a good value. That's to